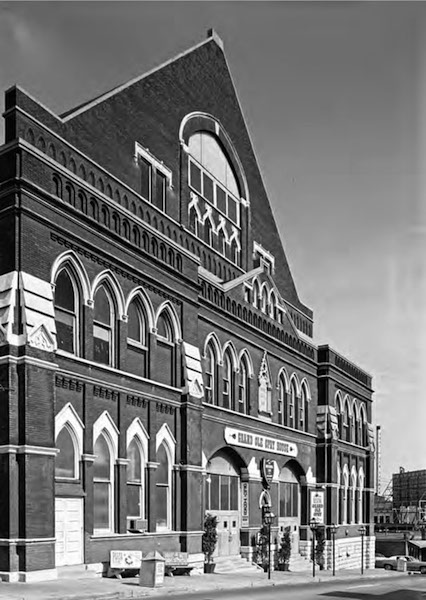 The Opry’s old downtown home, courtesy of the Collections of the Library of Congress.

"Nixon's visit (only five months before his resignation) was seen by national journalists and politicos to be a trip to one of the few places where he would still receive a warm reception, and it was quite warm indeed. Nixon took the stage, played two songs on the piano, and bantered with Roy Acuff."

As a genre of popular music, country music has never been as homogenous, stable, or traditional as both its critics and fans have often made it out to be. Even as far back as its commercial beginnings in the 1920s, country music’s multiple sub-genres and sonic diversity have defied easy categorization, and performers as well as fans rarely have fit the “hillbilly” stereotype that has long attached to the genre. The late 1960s and early 1970s, however, did find country music in a moment of considerable flux and potential consternation over whether the genre could maintain a coherent connection with its roots in the rural trappings and rustic performances of the early part of the American twentieth century. The country-pop Nashville Sound ushered in new instrumentation and production techniques—orchestrated violins, background choral groups, and smoother lead vocals instead of the fiddle, steel guitar, and twang of the previous eras—that made Nashville’s country music seem less “country” to some contemporary observers, who called for a return to what they saw as the genre’s true roots. In contrast with these extremely successful hits recorded on Nashville’s Music Row, country’s preeminent long-running live radio program, the Grand Ole Opry, resisted much of the change associated with the Nashville Sound, keeping acts who had performed for decades instead of catering to the new breed of country star, and retaining its traditional mix of comedy, tomfoolery, and song.