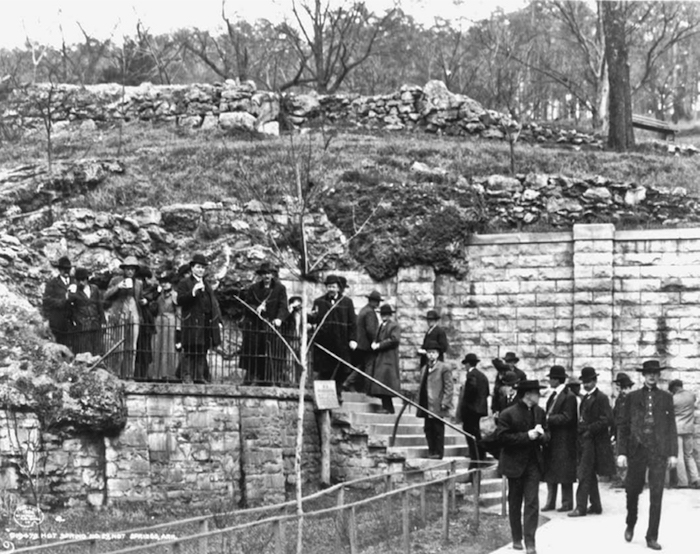 Men drinking mineral water at hot spring no. 29, ca. 1906, Hot Springs, Arkansas, courtesy of the Collections of the Library of Congress.

"'Well, of course I remember Pearl Harbor,' my mother says, the tone of her voice adding, What do you think I am, an idiot? She and my grandmother were working in the shop when they heard on the radio that the Japanese had bombed Pearl Harbor. She was five months pregnant with me. It was a Sunday. They'd never heard of Pearl Harbor."

Although the name of the town—Hot Springs, Arkansas—has been in my head for as long as words have been in there, it never occurred to me to think about the meaning of those words, to say to myself, “Oh, there must be hot springs”—as, indeed there are. The thermal waters flow from an ancient watershed at over 140 degrees Fahrenheit, but if my mother ever soaked herself in them, she never told me about it. By the time that she and my father, Gene, were living there in 1942, the town had been transformed from a popular spa for folks with arthritis into a rehabilitation center for sick and wounded servicemen—but she never told me about that either. The Hot Springs I heard about is the town as she remembered it—a miserable rural dump in the middle of the ignorant, stinking hot, crapped-out, nowhere South. She agreed to go there with Gene, she told me, “to save the marriage.”