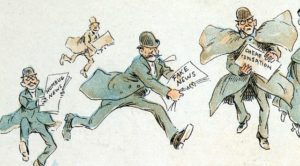 Save the date! We’re thrilled to host Kevin Kruse, Jamelle Bouie, and Nicole Hemmer in conversation to kick off our Fall politics issue, Left/Right. Guest edited by Joseph Crespino, the Left/Right issue explores and documents the many undercurrents, challenges, and paradoxes of southern political life.

Kevin M. Kruse is a professor of history at Princeton University. He specializes in the political, social, and urban/suburban history of twentieth-century America, with a particular interest in conflicts over race, rights, and religion and the making of modern conservatism. His most recent book, co-authored with Julian Zelizer, is Fault Lines: A History of the United States Since 1974.

Based in Charlottesville, Virginia, and Washington, D.C., Jamelle Bouie is a columnist for the New York Times and political analyst for CBS News. He covers campaigns, elections, national affairs, and culture.

Nicole Hemmer is an associate research scholar with the Obama Presidency Oral History project. A political historian specializing in media, conservatism, and the far-right, Hemmer is author of Messengers of the Right: Conservative Media and the Transformation of American Politics (Penn Press, 2016). Hemmer’s historical analysis has appeared in a number of national and international news outlets, including the New York Times, Washington Post, and the Atlantic.