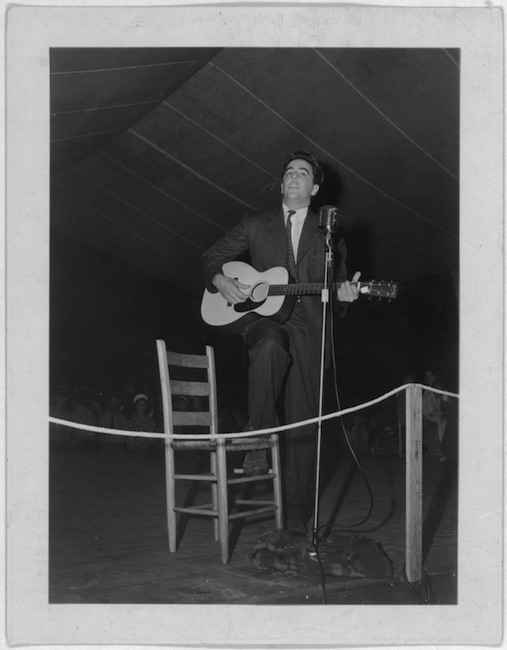 Alan Lomax, on stage at the Mountain Music Festival in Asheville, North Carolina, 1940, courtesy of the Collections of the Library of Congress.

"Stories about Alan Lomax and his exploits are legendary. While doing research in the Library of Congress Music Division, Lomax was sitting at a table across from a student who was reading his classic Folksongs of North America. At one point the student looked across the table and asked, 'Is Alan Lomax still alive?' Lomax replied, 'Just barely.'"

This essay was first presented as an address in January 2006 at a conference titled “The Lomax Legacy: Folklore in a Globalizing Century,” sponsored by the American Folklife Center and the Association for Cultural Equity, New York, at the Library of Congress in Washington, D.C.

How can we wrap our arms around Alan Lomax? He was a force of nature who appeared superhuman. I thought of Alan as a Minotaur—half man, half supernatural—who defied life as we know it. His very walk seemed to defy gravity as he slid gracefully with his distinctive gait. Sally Yerkovich recalls seeing Alan one day at the National Endowment for the Arts as he and his sister Bess walked side by down the hall, each holding reading glasses in their extended right hand. They moved with that familiar Lomax stride that covered great distances and led them both to people and places that we celebrate today.