Appalachia in the Making: The Mountain South in the Nineteenth Century edited by Mary Beth Pudup, Dwight B. Billings, and Altina L. Waller (Review) 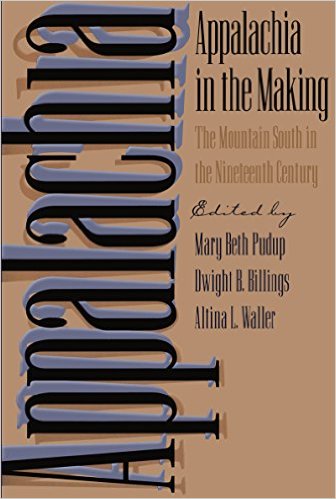 Appalachia in the Making: The Mountain South in the Nineteenth Century edited by Mary Beth Pudup, Dwight B. Billings, and Altina L. Waller (University of North Carolina Press, 1995)

Appalachia in the Making: The Mountain South in the Nineteenth Century edited by Mary Beth Pudup, Dwight B. Billings, and Altina L. Waller (Review)

Since the early 1960s a great deal of excellent scholarly work has emerged on Appalachia. Much of that work is the product of a conscious effort by younger scholars- a number of them represented in this volume- to correct unfounded misconceptions that had long flourished not only in popular forums but in scholarly works as well.  Following Thomas Ford’s The Southern Appalachian Region: A Survey 1962 and eastern Kentucky lawyer Henry Caudill’s Night Comes to the Cumberlands in 1963, a steady stream of books challenged received accounts of the region’s history and culture. Much of this scholarship has focused on the coalfields, however, to the exclusion of the majority of the region (which has no coal), and relatively little of it has treated the nineteenth century. Appalachia in the Making remedies much of the latter deficiency, and to a lesser extent it rebalances the overemphasis on the coalfields.Be advised, however, that the “mountain South” treated here consists for the most part of a four state area: Kentucky, North Carolina, Virginia, and West Virginia. Except to varying degrees in a few of the essays, there is nothing on the mountain or coal-bearing portions of another half dozen states (Georgia, Maryland, Ohio, South Carolina, Pennsylvania, and Tennessee) that have long been included in most definitions of Appalachia, or on several others (Alabama, Mississippi, New York) that were pork-barreled into the region during the 1960s. A number of the essays recapitulate their authors’ earlier monographs, but that is not necessarily bad. Read in close sequence with each other, the essays gain force and precision, and taken together they provide a tight synthesis for any student or scholar who has not followed these issues during the past several decades.