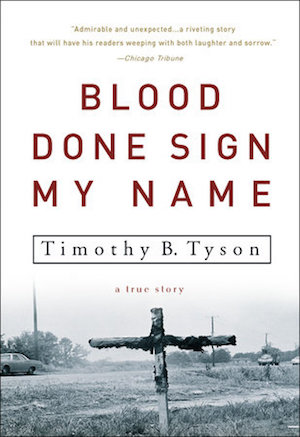 Timothy Tyson’s book about racial conflict in North Carolina is, in fact, a couple of things—both the account of a racially motivated killing in Oxford, NC, in 1970 and the story of one family’s, and one young man’s, coming to terms with race. The book is not, except in the broadest definition of that term, a racial conversion narrative, that genre given life by white southerners from Lillian Smith to Willie Morris and Will Campbell and beyond. Although Tyson confesses to having been, as a boy, “infected with white supremacy,” his was really a pretty mild form of the disease. And he got over it, at least its worst manifestations, more quickly than did most other white racial sinners.