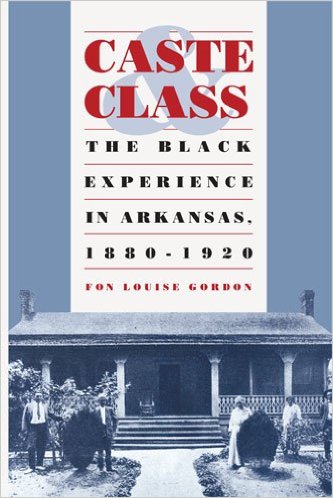 Caste and Class: The Black Experience in Arkansas, 1880-1920 by Fon Louise Gordon (University of Georgia Press, 1995)

by Sarah Wilkerson-Freeman
Southern Cultures, Vol. 4, No. 4: The South in the World

It is now more than forty years since the lines of Arkansas National Guardsmen, under orders from Governor Orval Faubus, blocked nine black students from entering and attending classes at Little Rock’s Central High School. When the 101st Airborne, sent by President Eisenhower, mounted their bayonets and escorted the black students past crowds of screaming and spitting white segregationists, the image of Little Rock, as an armed camp and epicenter of racial hatred and injustice, entered the collective memory of the nation. For many students of southern history and culture, this image dominates the understanding of racial segregation in Arkansas, but Fon Louise Gordon reminds us that the history of Jim Crow in the state involved more than tensions between blacks and whites: it also reflected tensions and differences between and among classes of African Americans.