We've published poetry in our pages since nearly the beginning. So when our friends at the CELLAR DOOR—UNC's oldest undergraduate literary magazine—said their Spring 2020 Issue would be delayed due to the pandemic, we threw open our own doors and asked them to join us. We're proud to present the work of seven Carolina undergraduates here. Cheers to these young poets and to the power of poetry to inspire and connect us during times of isolation. NOTE: Poems and line breaks may shift on a mobile device.

It is November, here. Towards
the back of my aunt’s property,

the pond isn’t yet solid; but
to be certain the only fish still

awake are the ones that eat
grease bubbles and water beetle

larvae. Held, now, in my gloved hand
is a, white, sick-looking catfish.

It looks like a bleached carrot. It
isn’t sick, it’s albino – but it looks sick.

My uncle knows him, says he was the
president of the pond (showing me the

pockmarks from prior catches). Today
he is not a lucky president. Slicing

into the fillet meat, the fish starts
gaping and ungaping his jaw,

gasping for air. Never mind the fact
that fish don’t have lungs

or the fact that the left half of
his body is now on ice near the porch.

The fish gasps for air in the same way
a drowning child does. He is both a fish

and not a fish. He is both a human
and not a human. He is trying to trick me,

already too late). We stare into each
others eyes and I do not believe

he is innocent. It is November and
today he is not a lucky president.

Prayer for the man who assaulted me, and later asked “how many times do I have to apologize for that?”

May there come a day, decades from now, that
you start to feel that something’s off; that you
start to smell traces of my perfume just when
you are drifting off to sleep; that you find a hair a
different color than your wife’s curled delicately
on your pillow. May you wake up from the
deepest part of your sleep trembling because
you swear you heard my voice carried in on
the breeze. May you feel someone humming
in the upstairs of your quaint suburban home
only to find the faintest warmth from my soles
left in the floorboards. May you be terrified.
May you taste adrenaline every time your
phone rings. May the street be filled with
cars that do not look like my old car but that
make the street quake like something I
might drive. May you hear my laughter,
the sweet kind from before, emanating
from behind your TV set. May you pull
out all the books on the shelves, picture
books and old textbooks and airport novels,
because you swear you saw between them
the flash of an eye, the one you once saw
huge in terror, now narrowed, cold and
determined. May you have to sing to yourself
always so you do not hear me waiting. May
your wife not understand. May you overhear
her on the phone to her mother, when she thinks
you are asleep, wondering if it will be tomorrow or
next week that you finally snap. May your
children aim weary looks at you, a stranger,
unkempt, wild eyed and sweating in what was
once their living room. May she send them to live
with her mother. May she start packing a suitcase.
May you be forced to move states by the memory
of me. May you be unable to eat because your
stomach is always full of me. May you sleep in
fits. May you hear my name in the mouths of
passing strangers. May the new city reek of me.
May you long to see me, finally, at last,
if only so that it will all be over. May your
wife call and you hear my soft chatter in the
background. May your kids’ new sitter have
the same name as me. May you find skin
under your nails though you have not touched
anyone in months. May you find yourself
crumbling to the ground begging on your worn
knees for forgiveness. May you repent so
forcefully and for so long, asking the benevolent
sky to crack open and drown your undeserving
lungs; asking the ground to boil and melt the body
you once allowed free reign of this earth and
all its bodies. May your pleas be so earnest
and distracting to passersby that it gathers
media attention. May I see your gaunt figure
on the news and it take me awhile to recognize
you because I have not thought of you in so long.

It is possible, just slightly possible, that then
I will forgive you, and it is only because I
remember feeling once how you feel there
on your knees. My god, how I pity you. Your god,
how I pity you. May you die of relief with my name
on your lips, praising me as a merciful lord,
one who is kind to animals.

We spent some hours in the back garden,
in the drained tone of dusk. Everything blue
and smelling callow, leisured trails between
wayward fronds. Toe-ing the cross-hatched dirt,

you & I leaned in close for a whiff, halting
for flowers with puckered edges,
enormous poppies or violet-clusters.
When conversation tapered out, we forked

and drifted. I wavered by the vacant hen-house,
while you stood entranced by some
moth’s intricate politics. So we walked our
silent figure-eights, one single cloud

going orange over the furthest roof,
Then: a gift. Finger of rosemary
in your palm. Bristled fragrance,
pale braid turning between thumbs.

Pocketed, and carried home, it dried a dark
umber, not unlike a burnt match coveting
its odor. Slight, curious creature of
my nightstand’s drawer: a mnemonic.

She has learned how to wilt greens by watching
The way sweat cooks the grass stuck to her feet;
Wonders if that’s how it would taste to singe
Herself with an open-mouthed kiss: salty, sweet.

Discovered roasting beets as an artist
Mesmerized by how the juice stains her hands,
Partitions flesh to scarlet chunks of ink
Peers the earthy peels into rugged fans.

Craves the way leeks must be cleft apart;
Removing the grit like a mother cat,
The fur and fleas catch in her lungs and heart
Swallowed through her fingertips, burnt and flat—

She has learned to love her separate sphere,
How rosemary burns, the scent of it here.

“David Best’s ‘Temple’ transforms the Renwick Gallery’s Bettie Rubenstein Grand Salon into a glowing sanctuary, offering visitors a quiet place to reflect and pay tribute to lost loved ones. Wooden placards are provided for visitors to write a personal message and leave within the installation.”

Build it. Hoist up the curling walls,
the cascading carved chandelier. For a bit
it is cloistered from the noise.

A couple of years later, take it apart—
the room cauterized, it was only briefly there,
maybe rebuild it out in the desert,
burn it back out of being—

and being here, it’s breathing in
a shared air. I walk to the altar, climb the steps and
for a moment, the room is just the hollow knock
of my boots up the wood. I peer over the edge—

piles of thin wooden slabs poured over,
I think of wishing wells. They are too far down
for me to read their overlapping asks.

A tiny sign tells us not to write on the walls, though
there is no one who wants to enforce it. People have written
across everything, they brought their own pens, deeper ink.

Bob, you would have loved this

Ian it’s spring and we miss you – Mom

I trace the room behind the few others who are here,
we are circling something together. Beside the altar,
the corner is wide enough for me to slide back
into the carving, and I’m back here alone
for a while to feel the walls
hold me at either side.

To my boy self,
I miss you buddy

And the eyes drawn on the walls, everyone lost
for something is drawing eyes
looking up.

I’m doing my best to let you go

Gasping out from the city center and here
in Washington they crouch behind their walls,
keep making their numbed decisions.

Outside the city is beginning its slow burn.
They are taking the temple down.
It was always meant to be temporary–
a bath of amber light, a break.
I don’t know who I came for.

We are losing sanctuaries,
they don’t wonder how to build more 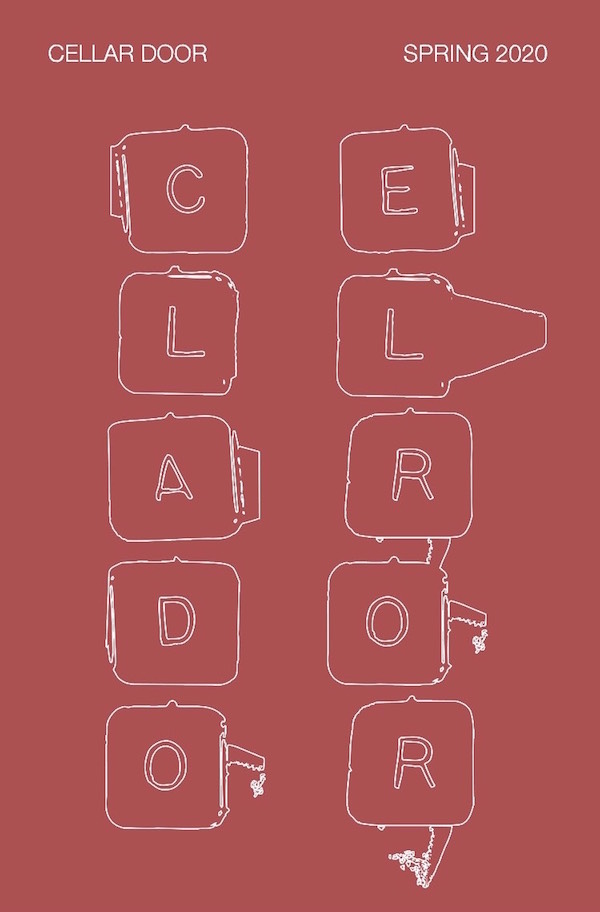 My mama used ta bring ‘em in,
run ‘em to the basement,
real quick so Daddy Foster didn’t see.
She’d fit ‘em snug in that ole’ chair
with their shoulders up an’ ropes tied strict like a
barb’ wire fence that only lets love through.

After the room was soakin’ in prayer,
an the Holy Ghost had answered His invitation,
she’d begin.
…………Outta breath, Uncle Trev would turn up
…………later.
…………Kids left at home with Auntie Rose.

Those two knew just what to do
in this strange delivery room,
but helpless at a hospital.
For Cuz’ Constance, it was as
smooth as Gramma’s hand-kneaded butta’ rolls.

Uncle Trev told her,
“Don’t be alarmed if I seem a little feisty, it’s
not you I’m chattin’ with, it’s that demon.”
Poor sucker wouldn’t stand a chance.

This is about tha time I’d close my eyes and
wanna inch away, but I never did.
No fear in perfect love, heard that?

Mama’d look ‘em in the eyes while they were
fully human, remind ‘em who they are:
worthy, loved, cherished, God’s image-beared.

Her marred hands engulfed Constance’s,
like God’s grasp of this green earth.
Then they’d call the Devil in ‘ha up:
the Tormentor,
the Evil One,
the Jealous One,
the Ancient Attack,
Saint of the Smokestack.
………..Mama tol’ me one time,
………..“Satan smells like sweaty body odor
………..masked by garlic-onion-juice
………..deodorant.”

In that low-lit room,
windowless room,
scream-proof room,
I saw the Devil himself leave Constance.
Uncle Trev told that Bein’ it had to leave in the
name of Jesus.

It did just that.

Sydney James is a junior studying advertising and creative writing from Stokesdale, NC. She’s seen the goodness of God in the land of the living; it’s her favorite thing to write about.

Kate Meadows is a junior studying Comparative Literature with a minor in creative writing. She was born in Warner Robins, Georgia, but has lived most of her life in Chapel Hill. Outside of poetry, she enjoys embroidery and bird-watching.

Lydia Weinberger is a junior from Raleigh, North Carolina studying political science, studio art, and creative writing. She is currently in the process of re-addicting herself to coffee.

Jacob Yankey is a senior from Wilmington, NC studying chemistry and minoring in creative writing with a focus in poetry. Following graduation, he has aspirations to become a trophy husband.

Rachel Slover is a senior math major and creative writing minor from Bethesda, MD. She is so happy to be here & be writing.