Children of the Heav’nly King: Religious Expression in the Central Blue Ridge (Review) 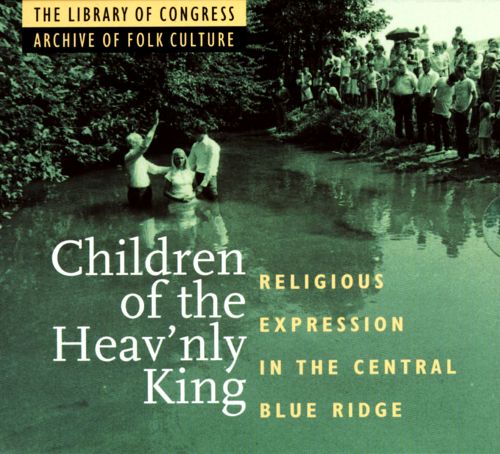 Children of the Heav'nly King: Religious Expression in the Central Blue Ridge (Rounder, 1998)

Children of the Heav’nly King: Religious Expression in the Central Blue Ridge (Review)

by Gavin James Campbell
Southern Cultures, Vol. 4, No. 4: The South in the World

Between 1978 and 1979 the Blue Ridge Parkway Folklife Project systematically documented the expressive culture of an eight-county area straddling the Virginia-North Carolina border. From this study comes the material for two CDs containing visions, singing, prophesies, prayers, and sermons. Sampling both white and black congregations, and roaming from churches to the baptismal river, the material is broad and deeply personal. Leonard Bryan describes his conversion, Edgar Cassel recounts his struggles with God after being called to be “a fisher of men,” and Reverend Robert Akers, despite being exhausted, sings “What a Time We’re Living In” because “people could request it tonight and be gone tomorrow and then I’d always regret that I didn’t sing it.” A ninety-six-page booklet provides context as well as a comparative discography for the musical selections, which range from lined-out hymns to gospel favorites. Taken together, the material paints a full, coherent, and moving portrait of religious expression in the central Blue Ridge.