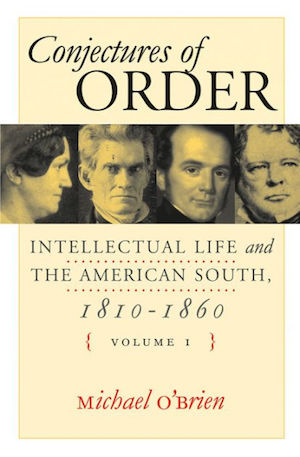 At one time more than a few eyebrows would have been raised at the idea of an intellectual history of the Old South stretching into a second volume. (And we are not talking about an unportly second volume here.) The Old South used to be seen as a place where the enervating heat, the scattered population, the draw of partisan politics, and the white indolence made possible by black slavery all combined to rule out genuine intellectual activity. We know now, of course, that such a depiction masks more than it reveals the life of the mind in the antebellum South. A generation of historians have documented the extent and (in some cases, at least) the caliber of antebellum southerners’ cerebral endeavors. It is fitting that it should be Michael O’Brien who, with his Conjectures of Order, provides a sort of capstone to this body of work. Much of his career has been devoted to establishing the legitimacy of southern intellectual history, both before and after the Civil War, as a worthwhile pursuit. Through numerous publications, and in his capacities as series editor of the Southern Texts Society and initiator of the Southern Intellectual History Circle, O’Brien has influenced and facilitated the work of countless other scholars in the field. Were the phrase “dean of antebellum southern intellectual history” not so unwieldy, I might be tempted to use it here.