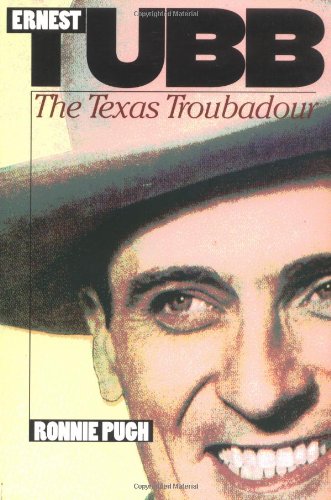 by Bill C. Malone
Southern Cultures, Vol. 3, No. 3: Sports in the South

Ronnie Pugh’s biography of Ernest Tubb and Craig Morrison’s study of the rockabillies are more than worthy additions to the growing list of books on southern musicians; they are also contributions to the history of the southern working class. Although they chronicle the lives and careers of very different types of musicians, they nevertheless tell us much about the transformation of working-class culture in the thirty years beginning with the Great Depression and about the ways in which working people coped with those dramatic changes. White working-class southerners don’t often get books written about them unless they become a public nuisance, as did Pretty Boy Floyd or Larry Flynt, or unless they excel in some area of public approval such as sports, military service, the ministry, or music. Musical excellence, as a matter of facts, didn’t begin to inspire much in the way of academic scholarship until about thirty years ago, even though people like Jimmie Rodgers, the Carter Family, Bob Wills, Hank Williams, and Elvis Presley had long been demonstrating the veneration that southern folk have their musical heroes. Since that time there has been an avalanche of writing on country musicians and related stylists. The quality and style of this material are of course highly uneven, ranging from nothing more than fan adulation and breezy journalistic prose to serious, analytical discourses such as Robert Cantwell’s Bluegrass Breakdown and Greil Marcus’s Mystery Train. Whether aimed at an academic audience, or at those who get their intellectual sustenance from drugstore magazine racks, this literature should command the attention of anyone who is interested in the history of southern working people. Country-music books often reveal little more than the perceptions of their writers, but with some exceptions, they also tell us much about the way working folk dealt with the powerful forces that have transformed their region and culture this century. Music has accompanied every successive transformation of southern life, providing a sense of identity, community, and emotional release for people who were being relentlessly removed from their older social moorings.