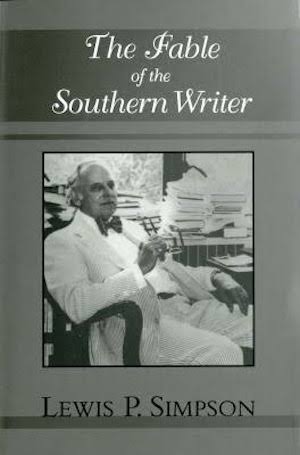 Once upon a time there was “The South,” and it was both historical and ideological. “Of the Mississippi the bank sinister; of the Ohio the bank sinister” one of the poetwizards of the South wrote, thus placing it simultaneously on the maps of history and of Mind. Into this magic realm came a young “clerk,” Lewis P. Simpson, and it was his vocation to explore the South-as-Mind. He suspected that the South was actually an outpost of a larger Kingdom of Mind, America, which in turn was also an outpost of a larger entity, the West. This was a riddling view, but Simpson was and is an aficionado of riddles and puzzles with interlocking parts. He was at home in Mind, knew its language and manners. For more than four decades he explored and mapped Mind and the South, rather than Mind of the South, which was another explorer’s motto. Nuance was one of Simpson’s most telling instruments, and he also had the special talismanic idea of a senior wizard named Eric Voegelin to help him with the larger picture. Simpson then picked up morsels of nuance in the territory of Mind-and-South, and he dropped some on his trail for us to follow.