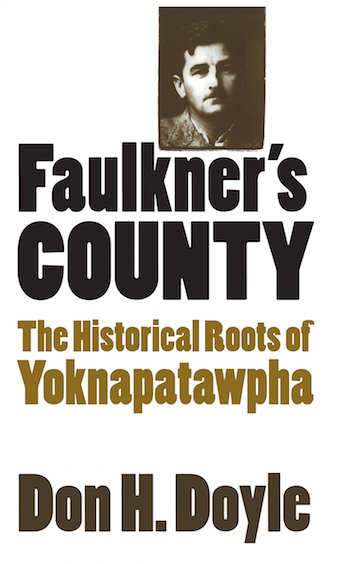 William Faulkner’s imagination has been the subject of literally hundreds of scholarly essays and books. Since his death in 1962, what people see as the enigma of this great American novelist has prompted biographies, close readings of his fictions, and a range of theoretical treatments of those works that still leave students and scholars puzzled. Who was Billy Faulkner, the sometimes modest, sometimes flamboyant, and always driven writer? Working within the postage stamp of his homeplace—Lafayette County, Mississippi—Faulkner claimed his right to be considered one of the most significant novelists of modern times, even as his life itself mandated against his ever attaining such a position. What historian Don H. Doyle provides in his Faulkner’s County: The Historical Roots of Yoknapatawpha is a kind of scaffolding for any number of interpretations of Faulkner’s oeuvre. In always clear prose, Doyle provides a wealth of information that supplements what we already know. Doyle shows how much Faulkner’s home county gave the inventive writer, in both its commonplace and unremarkable dailiness and its startling, sometimes macabre, events. Faulkner’s county, it becomes clear, was not merely the context for his narratives: it often was the starting point for them.