George Henry White: An Even Chance in the Race of Life by Benjamin R. Justesen (Review) 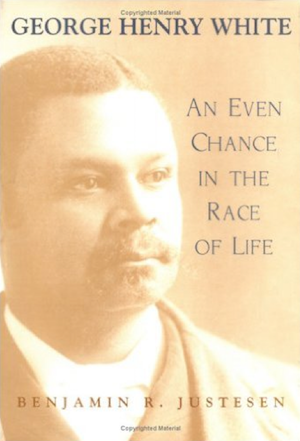 George Henry White: An Even Chance in the Race of Life by Benjamin R. Justesen (Louisiana State University Press, 2001)

George Henry White: An Even Chance in the Race of Life by Benjamin R. Justesen (Review)

In July 1900, George Henry White allegedly stated, “May God damn North Carolina, the state of my birth.” If true, what prompted this comment? In 1896 White attained the highest public office of any African American at the time when he was elected to the United States House of Representatives. As the only African American in Congress, White thought of himself as a national leader and the political spokesman for his race. Conversely, white supremacists in North Carolina saw him as an embarrassment to their state. The violent white supremacy campaign of 1898 allowed the “most vicious element of the white race” to gain control of the state. Jim Crow laws were enacted, disfranchisement of the masses of black voters was almost a certainty, and White believed that his third wife’s health was permanently impaired due to the invectives and innuendoes aimed at her during political contests. Simply put, white supremacists had virtually destroyed White’s life. His reputation, public esteem, and livelihood were seriously damaged, there were threats on his life, and he was a lame duck Republican congressman who would “not go home again” because he no longer felt able to live like a man in North Carolina.