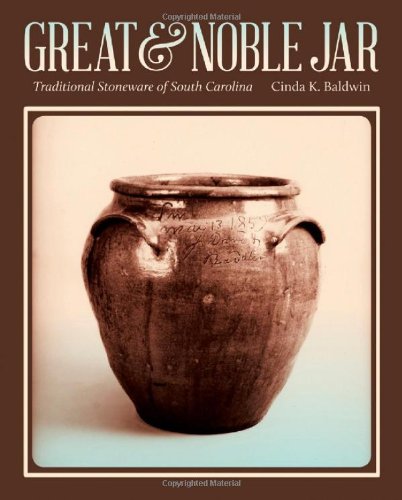 At an exhibition at the Mint Museum of Art in Charlotte, North Carolina, in 1986, I encountered a handsome alkaline-glazed pot turned in the Edgefield District of South Carolina by a slave potter named Dave. Sturdy and functional, the piece represented far more than just a useful storage vessel. With a clever verse and the able potter’s signature incised expressively on the exterior, the pot was not only a historical document, but a work of art as well. I was fascinated and wanted to learn more about South Carolina folk pottery. Unfortunately, a comprehensive collection of information on the subject was not available to the layman at that time. Now it is. Cinda K. Baldwin’s Great & Noble Jar: Traditional Stoneware of South Carolina—with information drawn from a great number of disparate sources—surveys the development of South Carolina pottery making from the discovery of suitable clays in the colonial period to the reestablishment of a folk pottery today.