From Il Trovatore to the Crazy Mountaineers: The Rise and Fall of Elevated Culture on WBT-Charlotte, 1922–1930 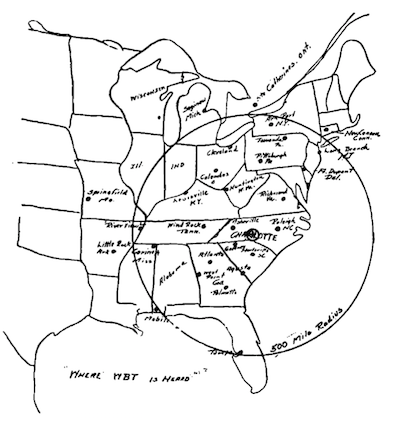 Reprinted with permission from the Charlotte News, 27 April 1922

From Il Trovatore to the Crazy Mountaineers: The Rise and Fall of Elevated Culture on WBT-Charlotte, 1922–1930

"Like many other flights of booster fancy, the predictions for WBT would gradually descend to earth."

On the evening of 27 April 1922, the sweet, romantic notes of Jules Massenet’s “Pleurez, mes yeux,” sung by Miss Kathleen Culbertson of the Carolina Concert Club, emanated from the Chamber of Commerce assembly hall in Charlotte, North Carolina, and spread out across the country. The all-opera concert, “the first musical program ever sent from Charlotte to the world by wireless,” marked the most ambitious effort yet put forth in the seventeen days that radio station WBT, the South’s first commercially licensed wireless operation, had been on the air. Compositions by Verdi and Gounod, by Handel and Saint-Saëns, traversed the distance between the assembly hall and the station’s headquarters in the city’s Realty Building, where a complicated set of tubes and wires launched them upon the airwaves. Boosters of the new technology hailed the service with enthusiasm, predicting a grand future of entertaining listeners and providing useful information, as well as “publishing Charlotte to the outside world and giving it a name even unto the isles of the sea.”