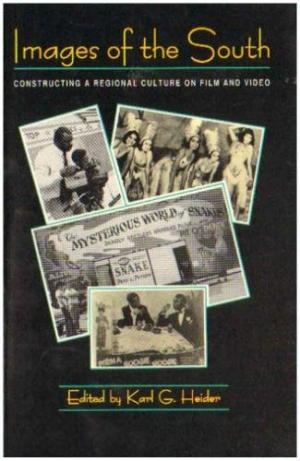 Images of the South: Constructing a Regional Culture on Film and Video edited by Karl G. Heider (University of Georgia Press, 1993)

by Ruth A. Banes
Southern Cultures, Vol. 1, No. 4: Southern Humor

In his autobiographical Tristes Tropique ([1955] 1973) structural anthropologist Claude LéviStrauss lamented that societies appropriate for anthropological study were rapidly disappearing, partially because of contacts with outsiders, including anthropologists. This may have been true, but as Heider’s book shows, anthropologists have vastly expanded their approaches and are substantially redefining their subject matter. Anthropology is becoming interdisciplinary and may be difficult to distinguish from American studies, history, education, or literature. Some anthropologists are filmmakers; others write fiction. Accordingly, this anthology presents eleven very different selected papers from the 1991 meeting of the Southern Anthropological Society. All explore the mythic South(s) depicted/constructed in popular culture, especially through drawings, documentary and feature films, folklore, photographs, and video. Most of the essays include black and white photographs, which enliven the text and help to persuade the reader. The authors label their work “visual anthropology.”