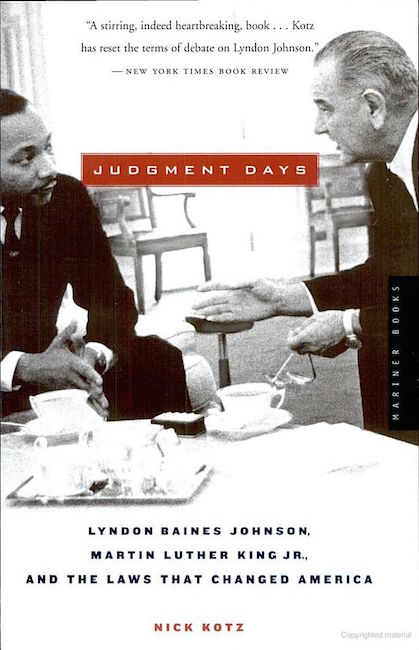 In contrast to the current emptiness of “compassionate conservatism,” Nick Kotz has written an important book about a president from Texas and a preacher from Georgia who both understood civil rights for black Americans as a moral issue that the American people needed to confront with action.

Judgment Days captures the soaring hopes and successes of the 1960s, when, in the wake of President John F. Kennedy’s assassination, the vision and moral leadership of Martin Luther King Jr. and the collective Civil Rights Movement joined together with the masterful political leadership and skill of President Lyndon Baines Johnson. It forces a new look at LBJ as a man of moral courage who deeply understood and confronted the crippling effects of three centuries of racial discrimination and who suffered from the failure of his effort to succeed in his war on poverty. It also captures the heartbreaking conflicts and devastating impact of the expanding war in Vietnam, including the ultimate breach between King and Johnson over the war’s morality as well as its commandeering of the resources that both recognized were needed to correct what Johnson would characterize as “the conditions that breed despair and violence” at home. He learned too late the fatal flaw in his belief that the country could afford guns and butter, a failure that fed bitter public divisiveness.