The Kingfish in Fiction: Huey P. Long and the Modern American Novel, by Keith Perry (Review) 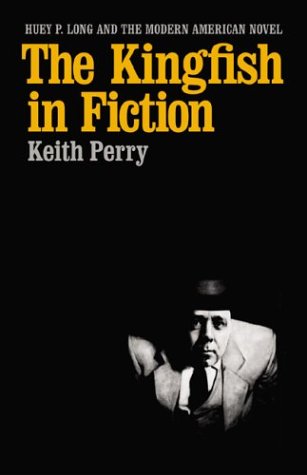 The Kingfish in Fiction: Huey P. Long and the Modern American Novel, by Keith Perry (Review)

Once when I was visiting Baton Rouge I happened to witness a keystone cops moment that would have made John Kennedy Toole’s patrolman Mancuso blush. I stood on the observation deck of the Louisiana State Capitol Building, Huey Pierce Long Jr.’s monument to ego, the visible remnant of his power, and the site of his death. And in common with the writers he inspired, I had to appreciate the somehow Roman dimensions of it all. From my vantage on the twenty-seventh floor of the concrete dreadnaught, the city appeared to quit gnawing at the swamp edges, or perhaps the swamp quit gnawing back, and I could see the river clearly, gambling barge locked into its harbor snug like a dog-in-coitus. Directly below, my eye fell upon two motorcycle cops, sentries navigating the topiary maze of the capitol grounds. The trainer was scooting around nimbly, but his hypercautious trainee was losing pace and soon found himself boxed in by a weak turn. A Harley Davidson is not easily corralled at low speed and a twelve-point turn proved to be too much. Finally, almost languidly, the motocop in training wobbled into the hedge and fell over. Blue light spinning, the siren wailed once, emitting a plaintive, descending note, like a child spilled from a tricycle. The senior officer responded expeditiously, but for all their tugging, the hapless fellows could not raise the cruiser again. Meanwhile, a crowd had gathered on one side of the balcony, pointing and laughing. But the most prominent witness to the spectacle was the statue of Huey P. Long, towering darkly over the cops, right hand outstretched beseechingly, as if to say, “Do you see what I’m working with?”