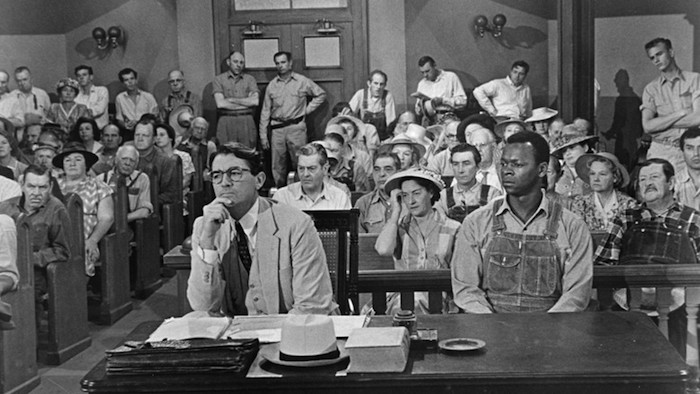 Scenes from the film To Kill a Mockingbird. Museum of Modern Art/Film Stills Archive. Reprinted with permission from Universal Pictures Company, Inc.

"On the surface the story is about growing up in a small southern town."

During his speech to the jury at the climactic trial of Tom Robinson in Harper Lee’s To Kill a Mockingbird, Atticus Finch presents a fundamental distinction between the two forces in conflict during the rape trial—the law and the code. Tom Robinson, he argues, has broken no law, but his accuser Mayella Ewell has violated the code by making advances to a black man: “She has committed no crime, she has merely broken a rigid and time-honored code of our society, a code so severe that whoever breaks it is hounded from our midst as unfit to live with. … No code mattered to her before she broke it, but it came crashing down on her afterward.”1 The point Atticus argues is that Tom Robinson, a black man charged with raping a white woman, must be judged by terms of the law, but he knows because of his life in Maycomb society that the jury will judge the defendant according to the code of that community. If the immediate issue for Atticus is legal evidence of rape versus pictures in the minds of jurors, in Bob Ewell’s language, “of that black nigger yonder ruttin’ on my Mayella,” his larger issue is the difference between the law that people are presumed to live by and the code they actually follow.