Lost Revolutions: The South in the 1950s by Pete Daniel (Review) 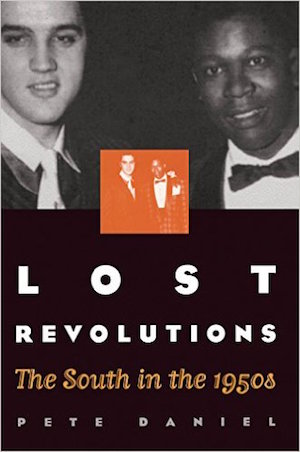 Lost Revolutions: The South in the 1950s by Pete Daniel (University of North Carolina Press, 2000)

Lost Revolutions: The South in the 1950s by Pete Daniel (Review)

The photograph on the front of Lost Revolutions captures what Pete Daniel’s book is about as well as any single image can. In Ellis Auditorium in Memphis in 1955, twenty-year-old Elvis Presley, one year removed from obscurity, stands with his arm around bluesman B. B. King. Race and class and the changing idea of culture all intersect in that one photograph. Sociologically speaking, Presley is undeniably poor white–that class of southerners in whom the most virulent brand of racial prejudice was said to reside. Yet, in embracing a black man he is doing something few “respectable” white southerners would have done at the height of post-Brown v. Board of Education “race-mixing” hysteria, particularly in a public place. In a deeper sense, in his music Presley always embraced elements of black culture that most genteel southerners—black as well as white–would not touch.