The Lynching of Emmett Till: A Documentary Narrative (Review) 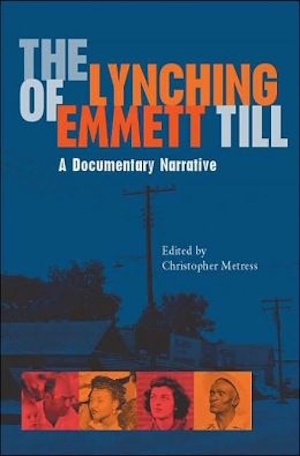 The Lynching of Emmett Till, ed. Christopher Metress (University of Virginia Press, 2002).

The Lynching of Emmett Till: A Documentary Narrative (Review)

Born near Chicago in 1941, Emmett Till was murdered in the Mississippi Delta on August 28, 1955, and became the best-known victim of racial violence in American history. Visiting relatives shortly before he would have become an eighth grader, Till entered a store in Leflore County and as a prank behaved suggestively toward Carolyn Bryant, the 21-year-old wife of the absent owner. Because of the breach of racial etiquette, Carolyn’s husband Roy Bryant and his half-brother, J. W. Milam, abducted Till from the home of his great-uncle, Moses Wright, pistol-whipped “the Chicago boy,” murdered him, and then dumped the corpse into the Tallahatchie River. Bryant and Milam were prosecuted about a month later; but, despite forthright testimony by the victim’s mother, Mamie Till Bradley, a jury of twelve white men acquitted them in late September, 1955. Protected by the Bill of Rights, which prohibits double jeopardy, the half-brothers soon recounted their crime to an Alabama journalist, William Bradford Huie, whose articles in Look Magazine in 1956 and 1957 were expanded into a pulp paperback, Wolf Whistle (1959), which kept the shocks reverberating.