Magnolias without Moonlight: The American South from Regional Confederacy to National Integration (Review) 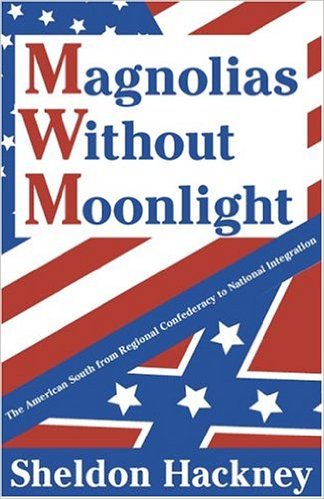 Magnolias without Moonlight: The American South from Regional Confederacy to National Integration (Review)

The contemporary southerner is compelled to swing both ways. Any white who stems from the region may be the proud legatee of the Confederate effort to destroy the Union a century and a half ago. Yet no section has exhibited more fervent patriotism, or has shown a fiercer eagerness to defend the nation, or has favored more readily the resort to military force even when the United States isn’t exactly under attack. (During the most decisive phase of the war in Vietnam, and then in both wars against Iraq, Texans served as Commander-in-Chief, giving orders to generals like William Westmoreland and Tommy Franks.) The mind of the South could be diagnosed as schizoid, because the yearning to diverge coexists with the need to merge; and the celebration of Rebels leaves unaffected the trust in authority. Nor has the insistence upon distinctiveness and even separateness prevented the South from becoming the most thoroughly Republican section of a nation that has in recent decades chosen GOP hegemony.