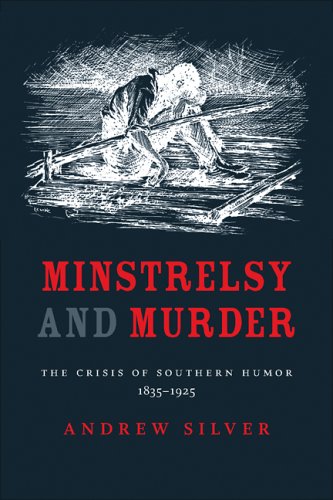 The cover art and title to Andrew Silver’s Minstrelsy and Murder are fair warning: this is a book about humor that will not let you smile. As Silver sees it, the late nineteenth century marked the end of a genial southern humor that obscured the injustices of class, gender, and race. Slowly, there emerged a dark new strain that revealed iniquity by juxtaposing comic and tragic images. Silver focuses on four authors: Augustus Baldwin Longstreet, George Washington Harris, Mark Twain, and Charles Chesnutt. He contrasts the painful history of post-Reconstruction America with the optimism of contemporary humor theorists who insisted that humor was meant for fun, not social criticism, and prescribed “amiability in the presence of racial terror, resignation in the face of labor injustice, and common patriotism in a time of imperialist aggression.” The crisis of southern humor occurred when this suppression of conscience was no longer tolerable. Silver has thoughtful, sometimes brilliant, things to say about his subject. If he does not see the whole of southern humor, his view is fresh, in a shocking way.