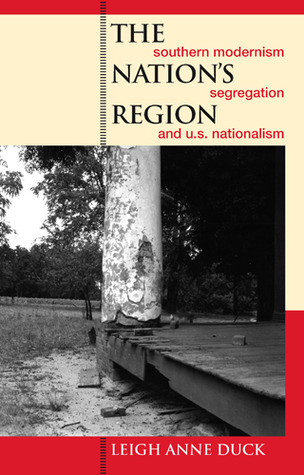 Leigh Anne Duck’s The Nation’s Region: Southern Modernism, Segregation, and U.S. Nationalism launches The University of Georgia Press series “The New Southern Studies,” edited by Jon Smith and Riché Richardson. Richardson is known for her work on black masculinity (the topic of the second book in the series) and Smith is known as co-editor of Look Away!: The U.S. South in New World Studies (2004), a volume of essays arguing for a globalist redeployment of Southern Studies, and for his pointed criticism of (what he considers to be) configurations of the field beholden to old ways and old critical ideologies, such as, for example, those expressed by Barbara Ladd in her review of southern studies in PMLA (120:5, 1628–39). The UGA Press touts the series on its web site as “a floor-to-ceiling rethinking of some of the central ideas of the last twenty years of critical theory.” “New” is the keyword, for “reinvigorat[ing] the old” is but a “secondar[y]” purpose for the UGA Press series and, it seems, for “The New Southern Studies” in general.