The image haunts me. I often imagine the finger slowly becoming submerged with the rising tides and my family’s history disappearing with it.

America’s origin myth is prevalent on the three peninsulas that form the western shores of Virginia—from George Washington’s Birthplace on the Northern Neck to the Mattaponi tribe’s museum in King William County, which exhibits a necklace that belonged to Pocahontas. Alongside those larger myths are smaller ones that compete for attention: a clock repair shop’s weathered display, a barber shop’s statue of a cow that advertises “cowlicks.” 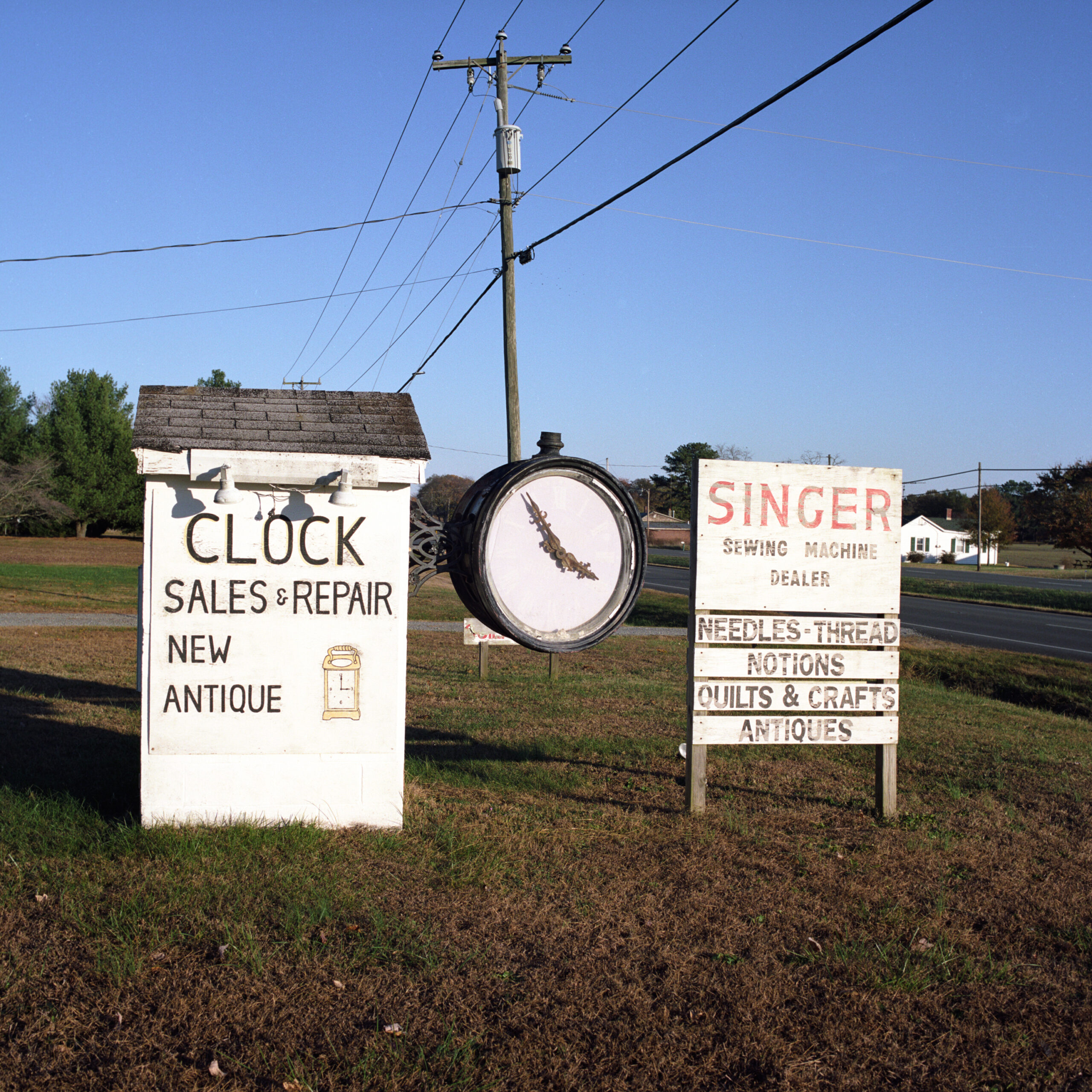 Notes from Atlantis is a photography-based project that looks at how myths influence southern perceptions of the environment. Taking its name from Plato’s myth of Atlantis, its central focus is on Virginia’s coastal region, which is predicted to experience the effects of climate change in profound ways. Virginia’s coastal peninsulas are adjacent to the prehistoric impact crater that formed the Chesapeake Bay, an event that is still causing the surrounding region to sink. Nonetheless, climate change is at best a politicized topic in the region. Combining Virginia’s origin myth with that of its beach culture and military industrial complex, the project surveys how these overlapping perceptions create a distinctive southern view of the environment.

On the Delmarva peninsula, which includes NASA’s Wallops Island, space rocket imagery is intermixed with propaganda for fireworks to mark the Fourth of July. On the south end of Delmarva, one can see a “rocket” that was once part of NASA’s visitor center, now repurposed as a roadside attraction. In part because the government has prohibited NASA from publicly mentioning climate change, its effects are not represented visually there, even as rising tides are already encroaching upon Wallops Island. 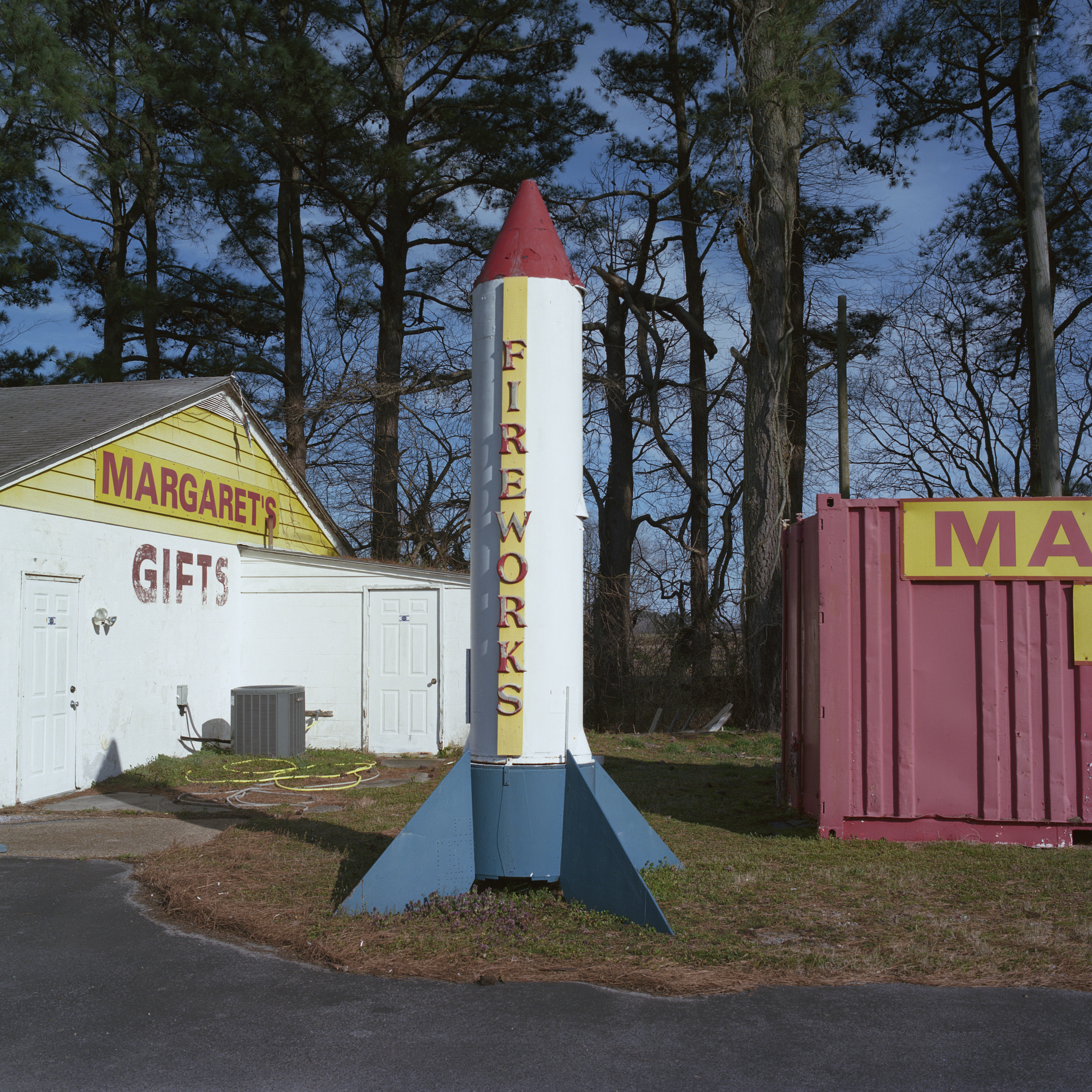 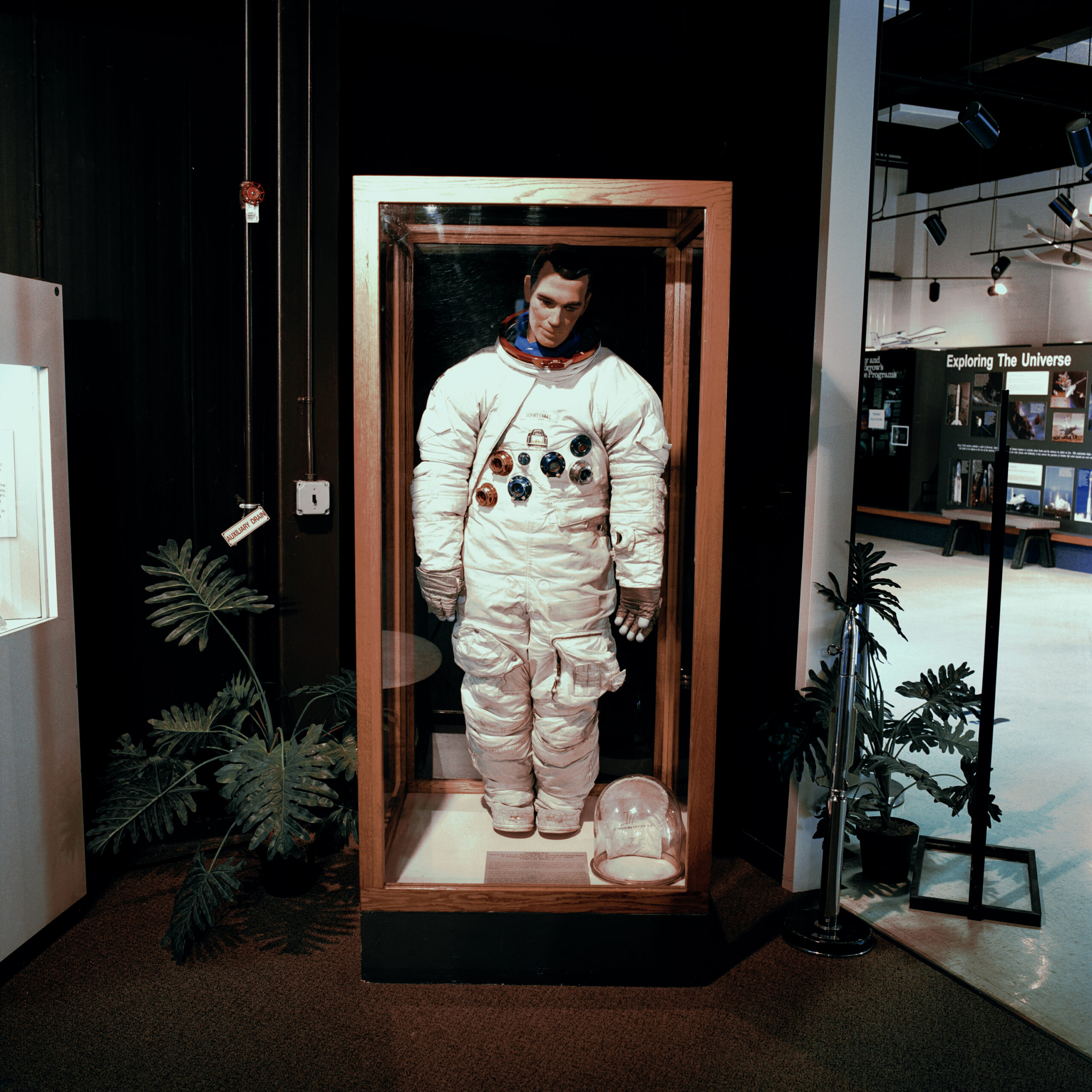 Ironically, perhaps, a nod to climate change appears on Virginia Beach in the form of an outsized statue of Neptune. In Plato’s Myth of Atlantis, Neptune (Poseidon) was the god of Atlantis. In probably the best-known story from Plato’s Socratic dialogues, Critias explains how the great country of Atlantis was suddenly swallowed up by the ocean. Though Plato offers little on this point, he does reveal that Atlantis had advanced military technology. With aircraft carriers in the surrounding waters and early-warning aircraft fleets (AWACS) filling the skies from the military bases surrounding Virginia Beach, US military technology is pervasive. Next to a hotel, I saw a mural that depicted fighter jets seemingly dropping beds into a dumpster owned by Ground Effects landscaping. It is likely, however, that residents and visitors view the Neptune statue as part of the beach culture Virginia Beach is trying to promote. 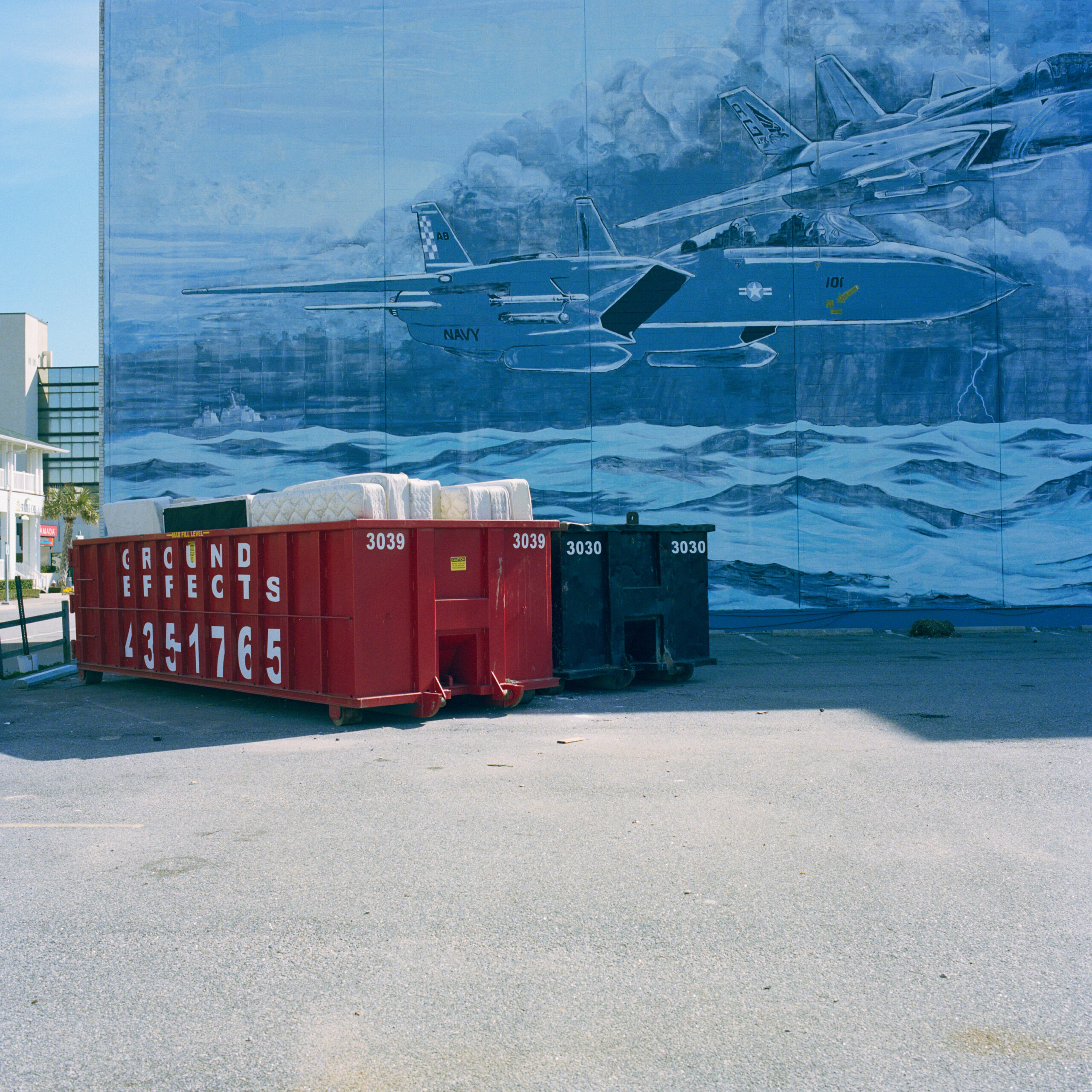 I am personally drawn to Tangier Island, where the highest elevation is around three feet and already much of the land is underwater. My family settled on this island in the late 1600s. It is part of our founding myth, and includes a relative who signed the Declaration of Independence. As I photographed a graveyard in front of a Tangier home, I spotted a headstone with a relative’s surname. Above the name was a hand with a finger pointing to the sky. The image haunts me. I often imagine the finger slowly becoming submerged with the rising tides and my family’s history disappearing with it. It reminds me that myths often emerge were we least expect them. 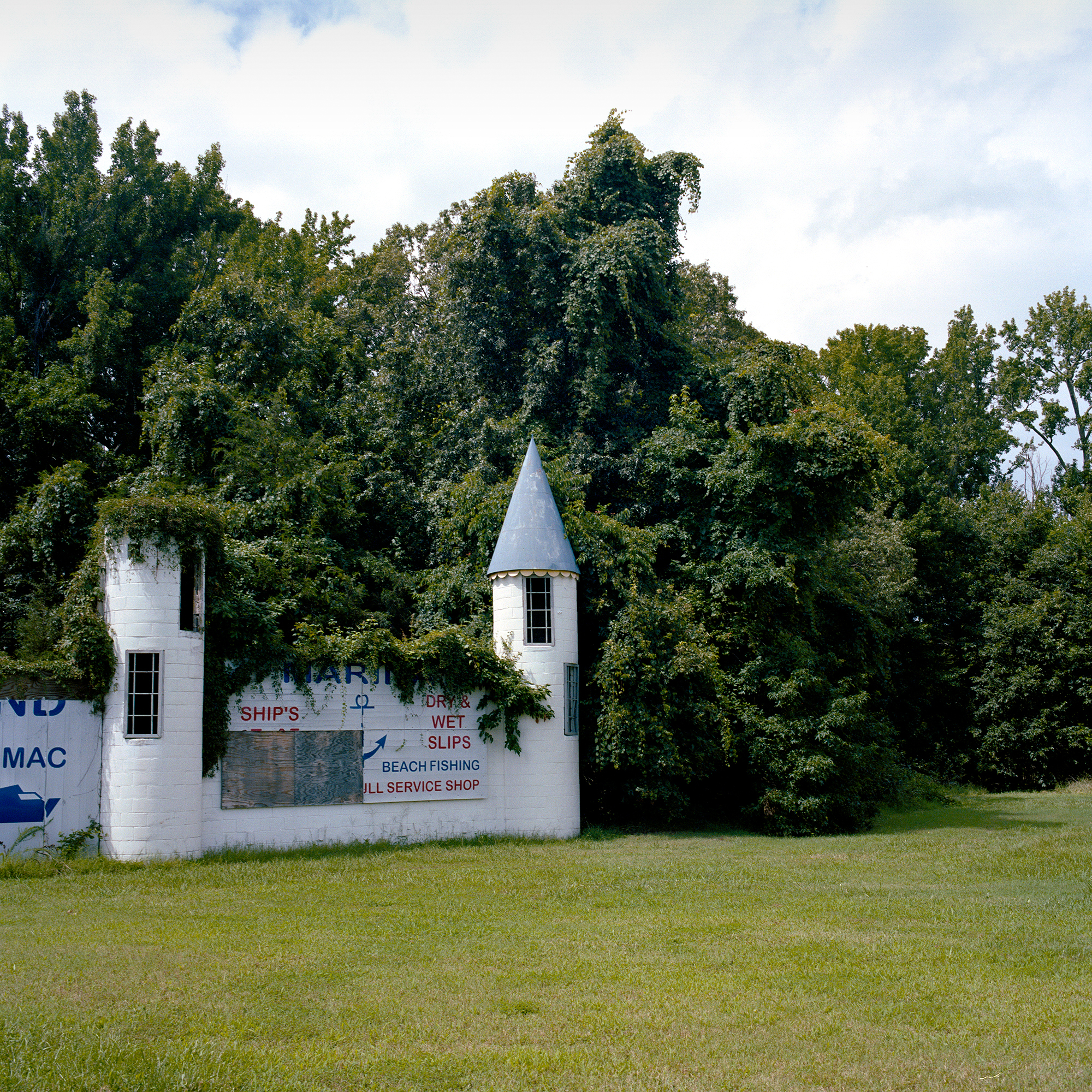 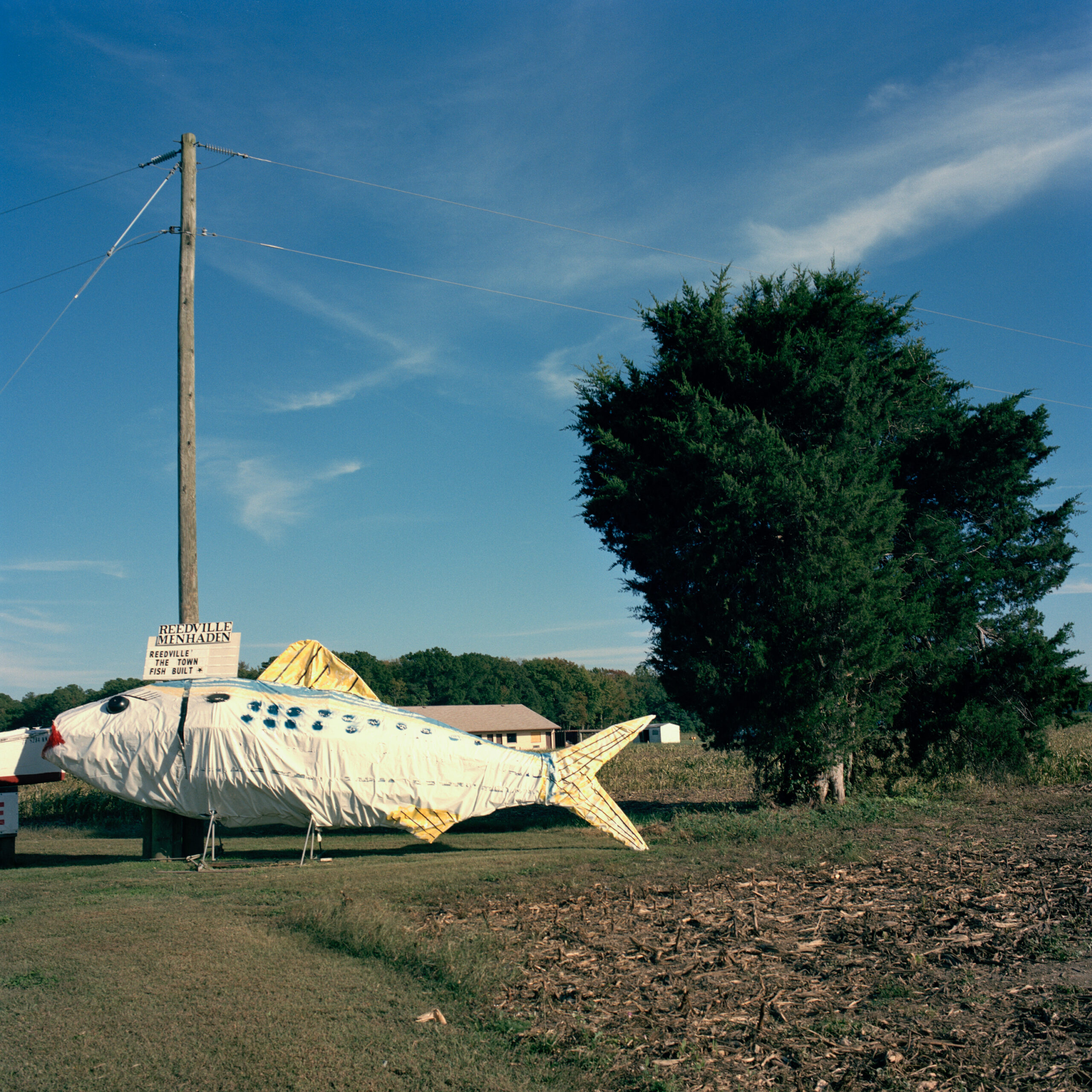 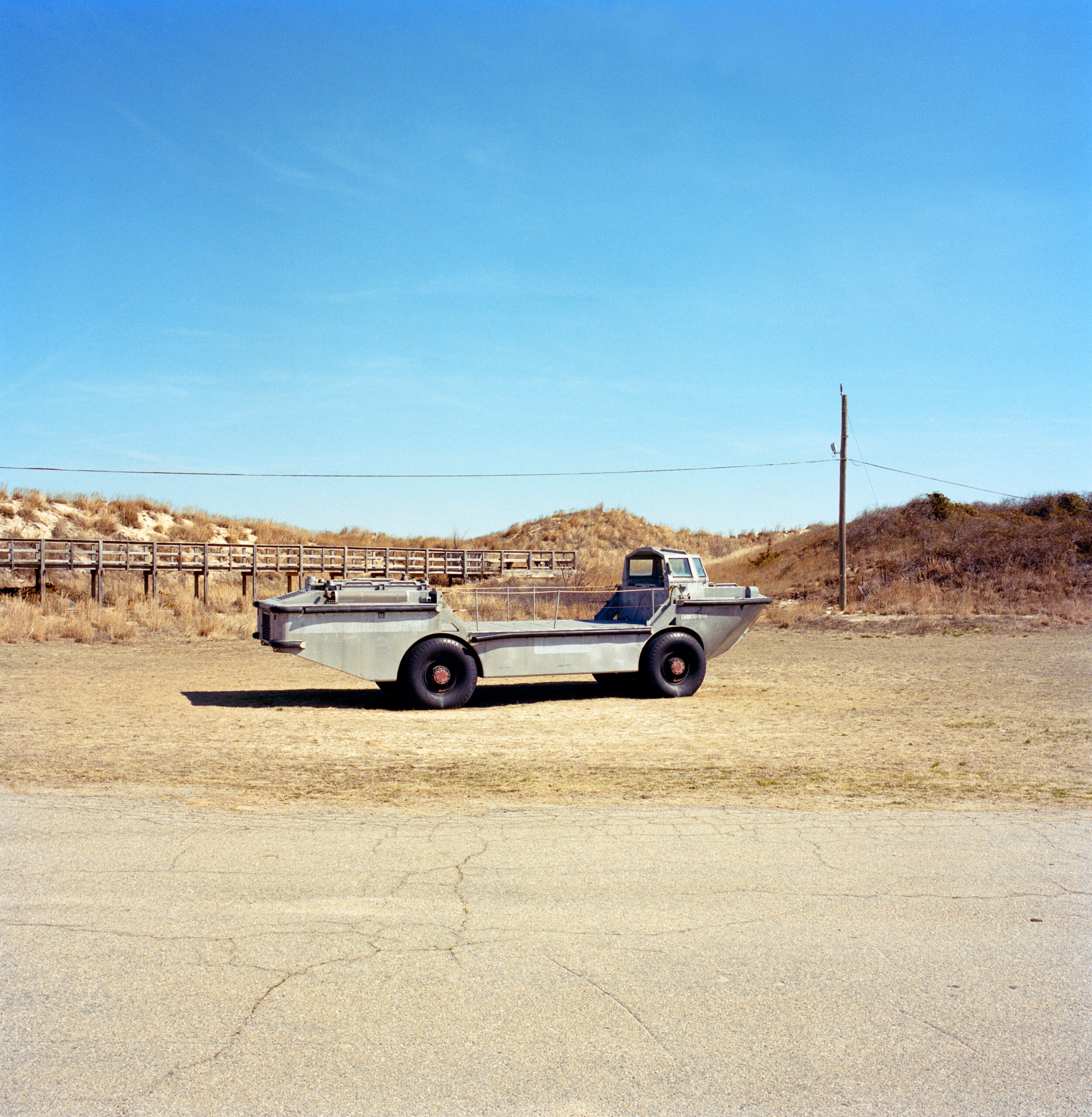 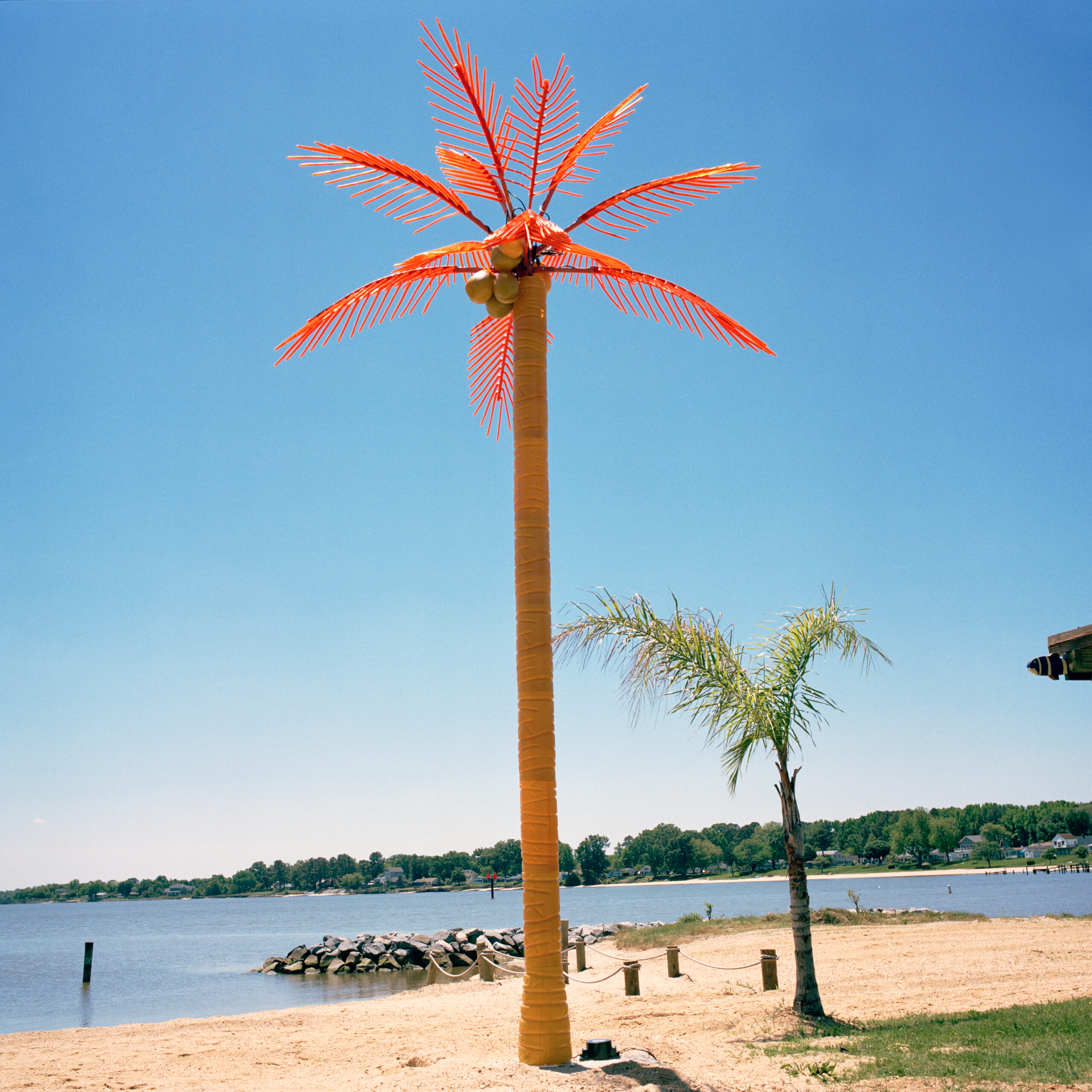 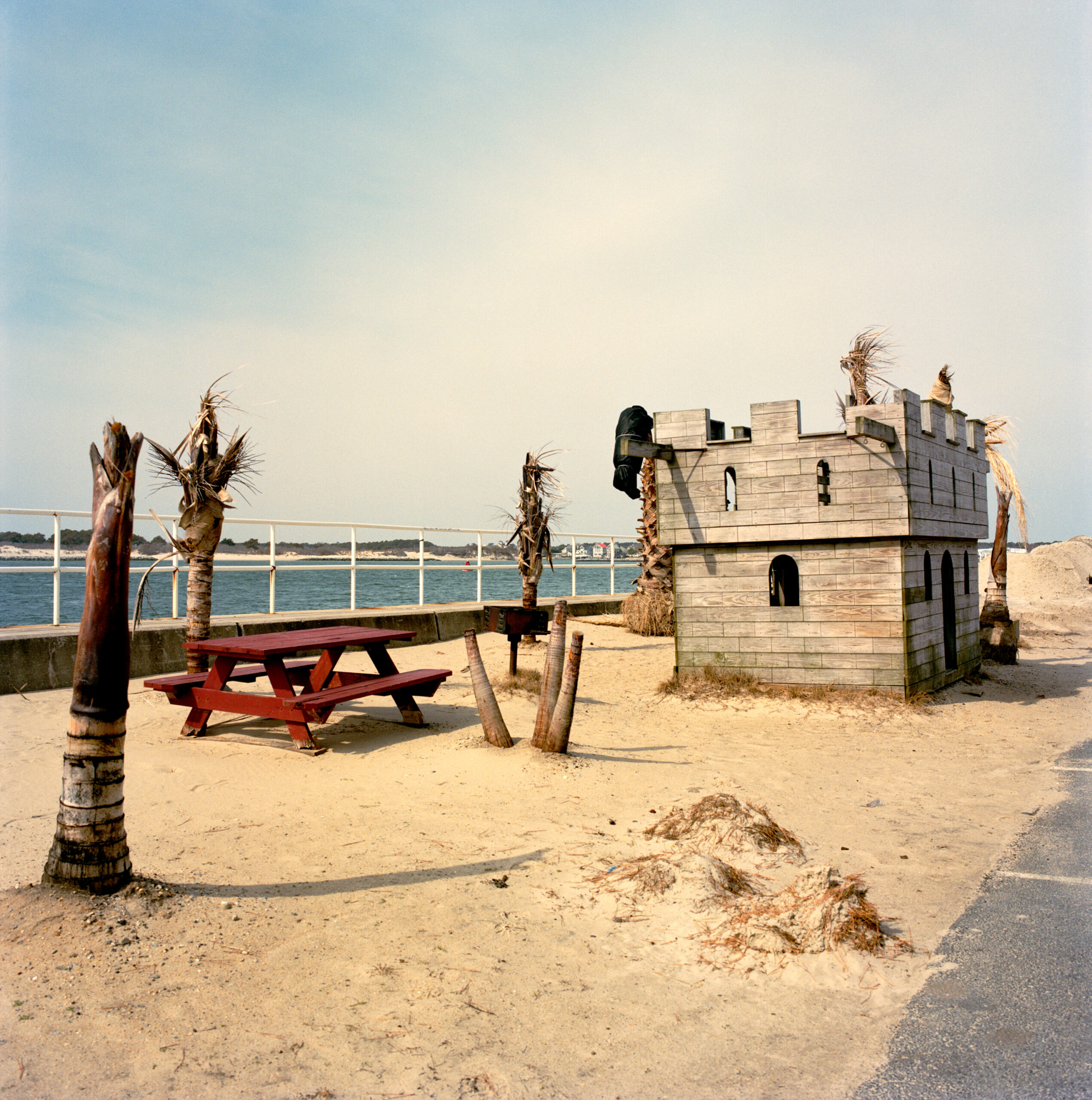 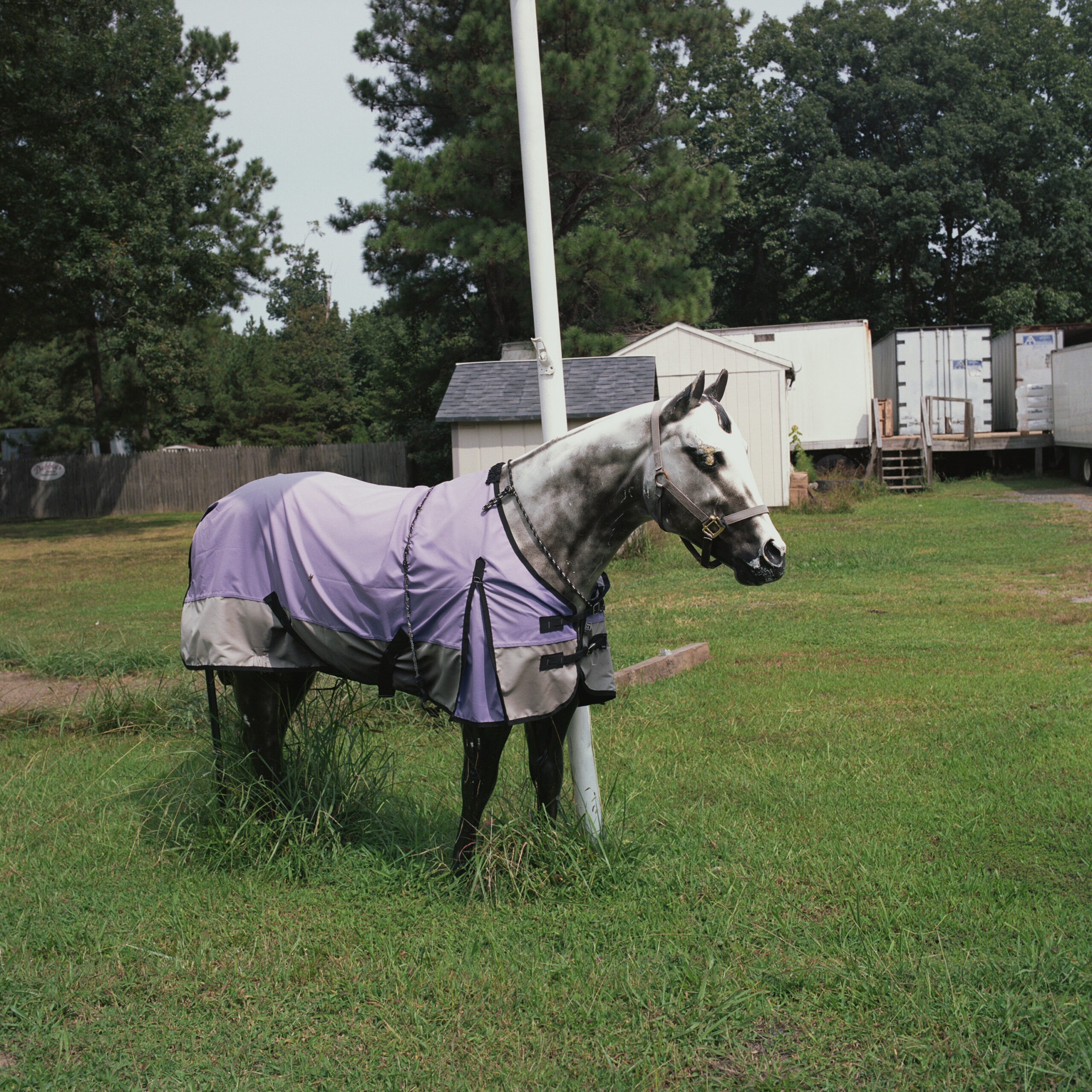 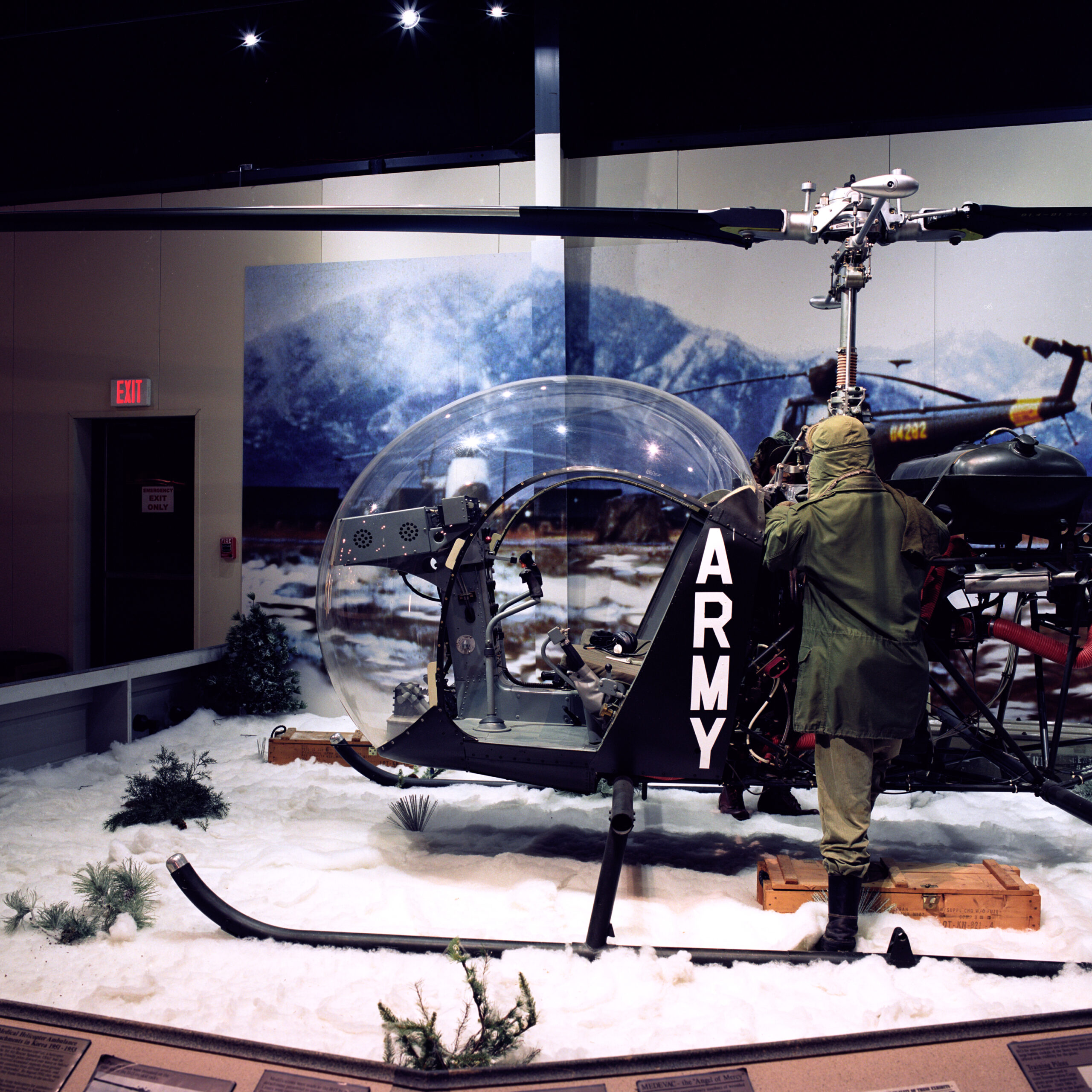 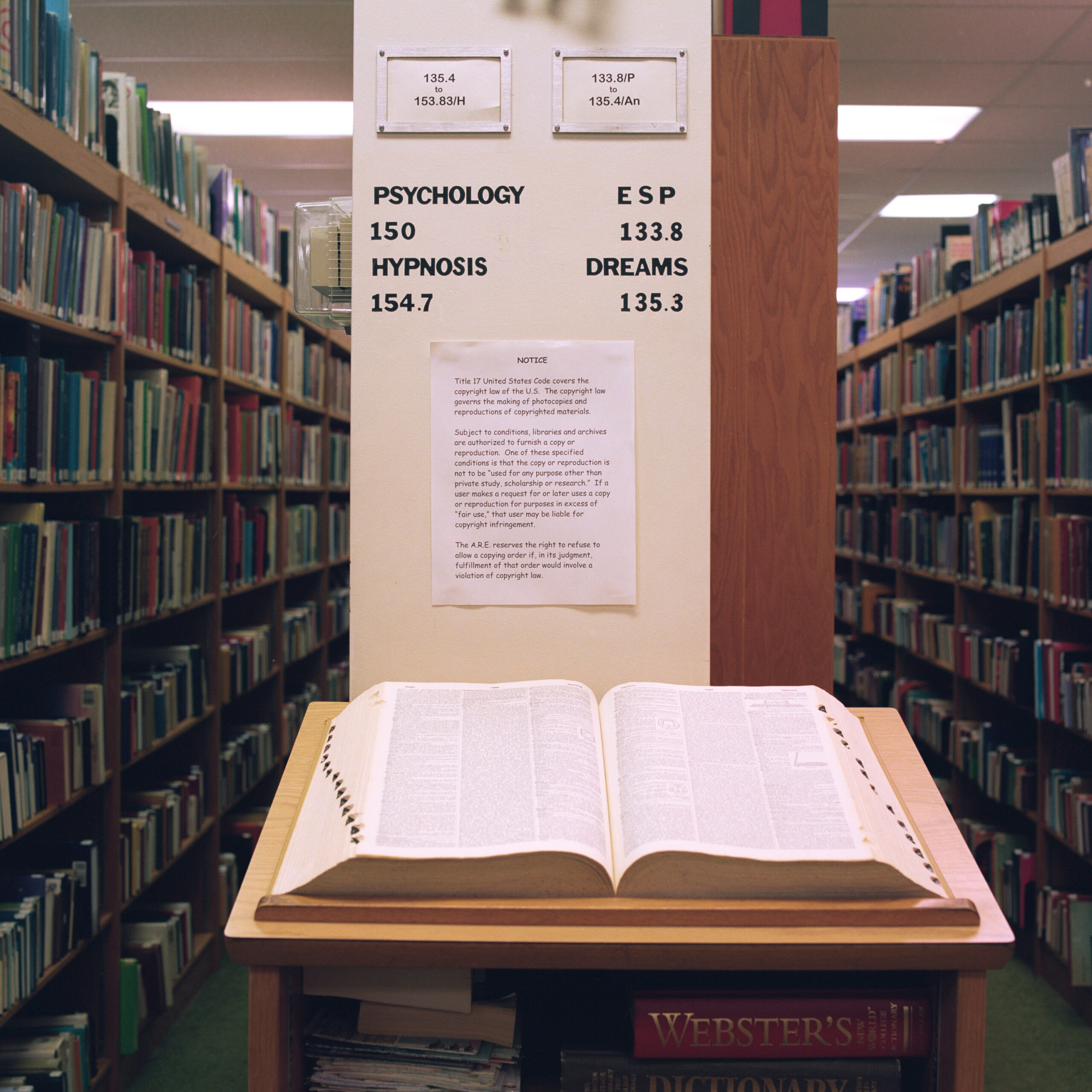 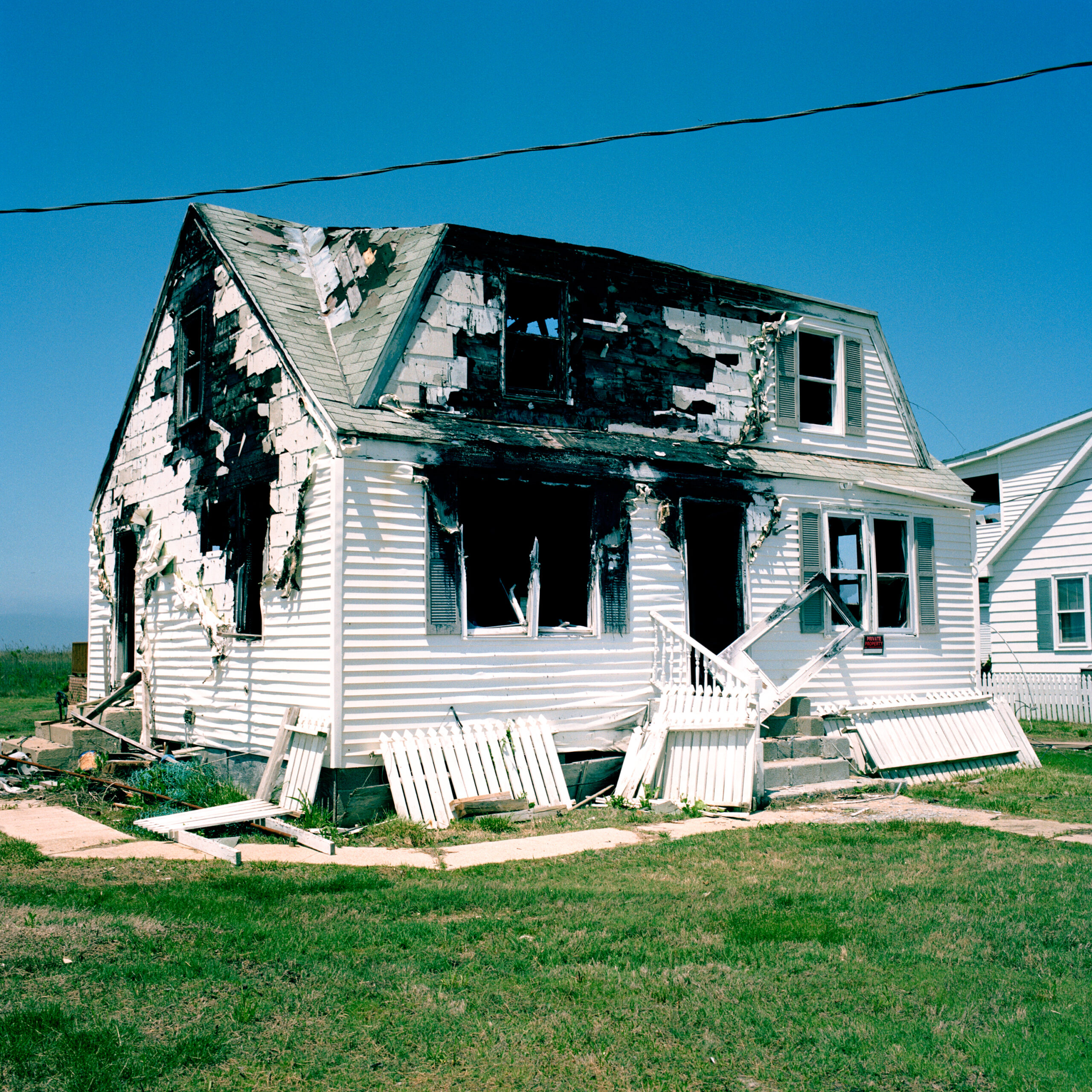 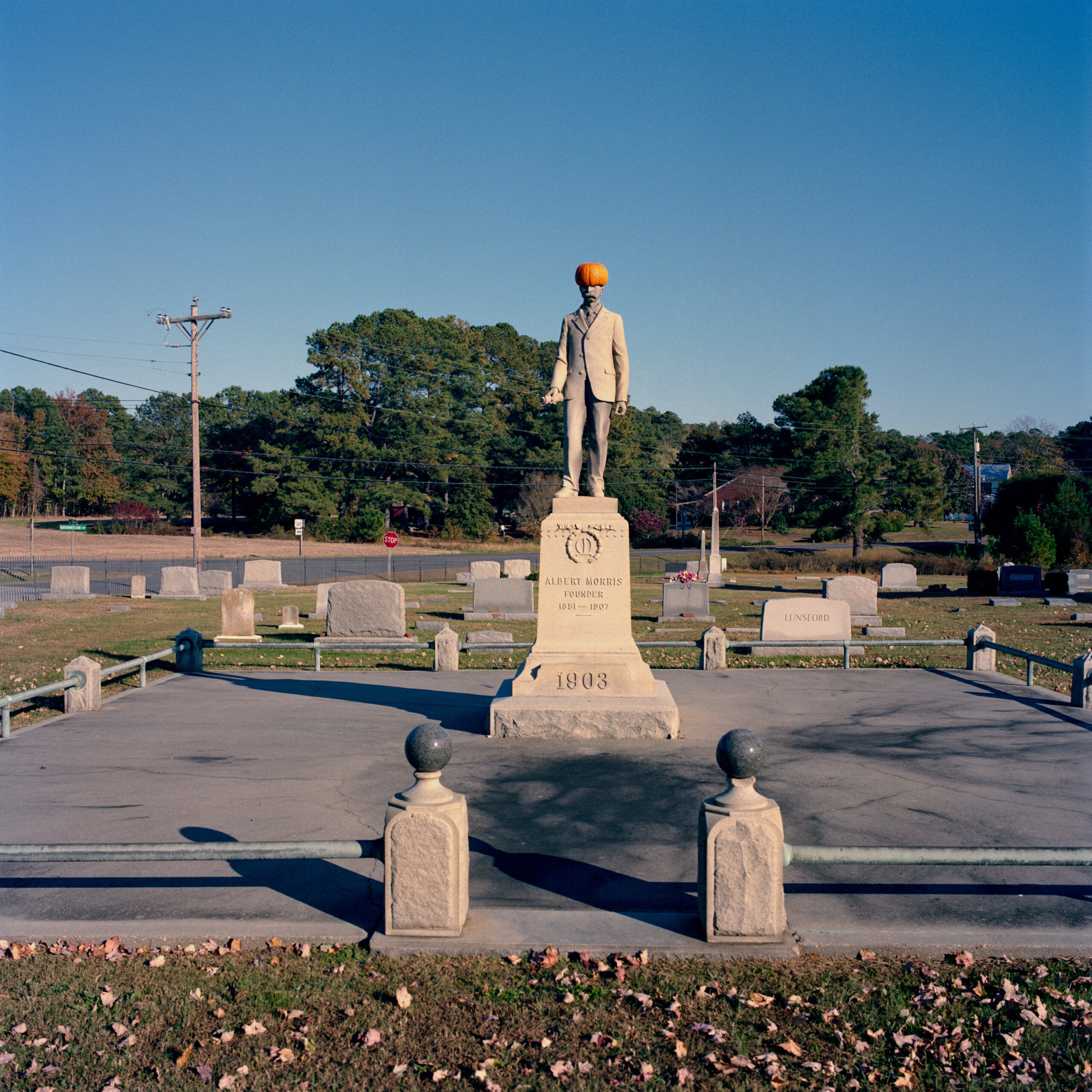 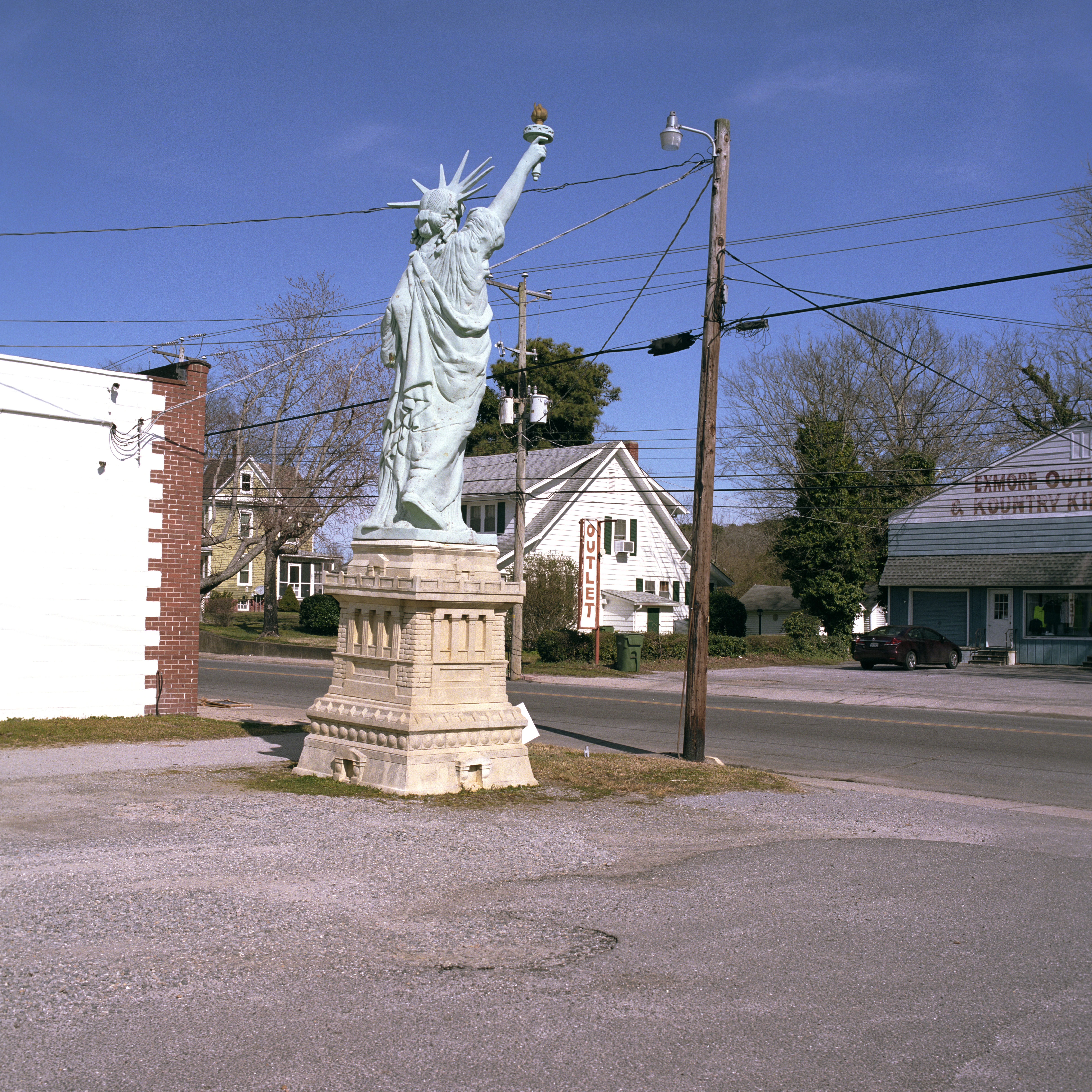 Richard Knox Robinson is a photographer and filmmaker based near Charlottesville, Virginia. His photographs have been featured in publications including TIME, Smithsonian, and the Washington Post. Robinson’s films have screened at festivals including Sundance, Hot Docs, and the Seattle International Film Festival.