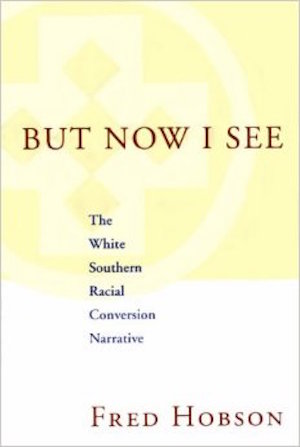 Sometimes a writer just gets it right. Fred Hobson does in his brief but enlightening examination of the “white southern racial conversion narrative,” But Now I See. Hobson reviews autobiographical works published by white southern writers since 1940—Lillian Smith, James McBride Dabbs, Will Campbell, Katharine Du Pre Lumpkin, and Pat Watters among them—and finds in them a secular version of the Puritan conversion narratives of the colonial era. Like the Puritan narratives of Cotton Mather and Jonathan Edwards, these white southern writers express their “guilt,” confess,” and then “repent” their “sins,” and, finally, achieve “redemption.” Similar too, these southern narratives seek both to cleanse the individual sins of the authors and to lead their people—their fellow sinners—to salvation. Unlike the colonial New Englanders, however, most of the writers in Hobson’s study focus less on finding the Kingdom of God in heaven than on achieving the beloved community of racial harmony on earth.