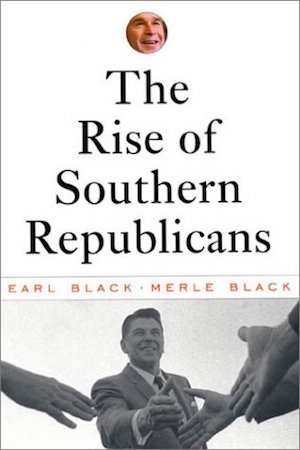 The Rise of Southern Republicans by Earl Black and Merle Black (Belknap Press, 2002)

Election 2002 was kind to southern Republicans. When the votes were counted, the GOP controlled 13 of the South’s 22 seats in the U.S. Senate and 76 of the region’s 131 seats in the U.S. House of Representatives.

This development is remarkable given the Democratic Party’s historical dominance of southern politics and the relative speed of Republican growth. In 1950, for example, the eleven southern states sent exactly two Republicans, both representatives, to Washington, but roughly 50 years later Republicans constituted a majority.