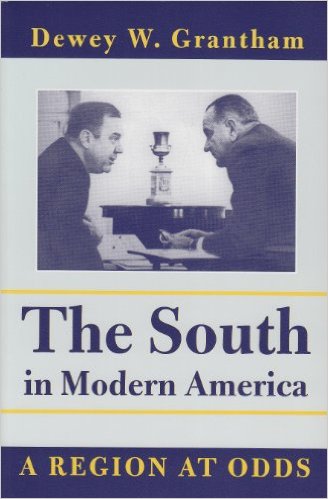 The South in Modern America: A Region at Odds by Dewey W. Grantham (HarperCollins, 1994)

For the past half century or so, scholars and social critics have sought to understand the often ambiguous relationship between sectionalism and nationalism. Examining a unique cluster of political, economic, cultural, and geographic factors, students ofthe South in particular have asked how much and to what extent uniquely regional characteristics have survived into our time. The most recent addition to this literature comes from Dewey W Grantham in HarperCollins’s New American Nation Series, still the leading venue for narrative synthesis by American historians. Recounting the interplay between the South and the rest ofthe nation, Grantham shows that powerful feelings of mutual antagonism between North and South continued during the century after 1877. The Civil War cemented the “social solidarity” ofsouthern white males. Historian and social critic Philip Alexander Bruce described this solidarity as “the sentiment that the Southerner is a separate and distinct sort of man, especially different from the Northerner, and that the distinction is one of which he should be proud.” This heightened regional self-consciousness arose from peculiar social and economic conditions: the plantation economy, rural isolation, poverty, an oppressive racial caste system, and a political system that stifled dissent.