We asked some of our friends and former contributors what they’ve been cooking from the cupboard during this time of self-isolation and limited grocery runs. Below, find three recipes that rely on pantry staples and that call on the comforts of home and family traditions.

This lockdown has produced lots of odd examples of cooking and eating. First though, let me say that for twenty-five years, I did neither of those things in my own house. I had routinely worked a seventy hour week, and when I did get off, I went out. When I retired last year from Crook’s Corner, I had to buy salt. Of course, one can’t go out for every meal, so my first year in retirement found me back in my kitchen from time to time. And all kinds of dishes from my culinary past bubbled up, with varying results. The biggest problem is that cooking for one is nearly impossible. Make a giant mess to fry two chicken thighs? Stew a single osso buco? Gumbo for one? None of the above. Shopping for one isn’t easy either. I can’t eat a whole head of celery in a week.

All of a sudden, this has gone from an amusing annoyance to an issue of safety. We’re supposed to shop as quickly and infrequently as possible, and we have to be more organized than I seem to be for this to work. For me, this has led to periods of both feast and famine. I’m reaching back for old favorites, but I’m also governed by what’s in my kitchen when it’s time to eat. Hence, this: peanut butter and banana sandwiches.

Legend has it that it was a favorite of Elvis Presley’s. We had it, but without bacon, when I was growing up. In normal times, it’s on the menu of Big Bad Breakfast in Oxford, Mississippi. I always order it because it’s one of the few things without eggs, and I dislike eggs at breakfast. I’ve decided that I prefer my bread toasted first, rather than to have the whole thing put in a sandwich press. I find it appealing that the inside stays crispy for the life of the sandwich. As for mayonnaise, I refuse to fight over this. Use what your grandmother used. It is hard to get a whole banana into one sandwich, so either eat the part you don’t use on your way to the table or double the recipe. 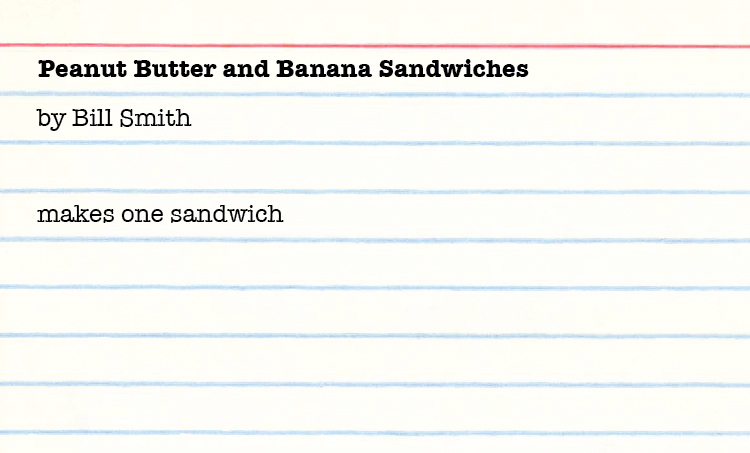 Two slices of plain white bread. Like with tomato sandwiches, you don’t need anything fancy.

Fry the bacon until it is crisp. Drain on a paper towel. Reserve its grease for another use. Toast the bread on the “dark” setting. It’s fine if it seems a little dry. Spread one slice thickly with peanut butter, the other thickly with mayonnaise. Peel and slice the banana. I have found that the sandwich is less likely to fall apart if it is sliced lengthwise instead of into rounds. Put the bacon and the banana on one slice of the prepared bread and top with the other. Cut the sandwich in half. Voilà!

When I was growing up in Watauga County, North Carolina, my family ate three kinds of fish: brook trout we caught, fried seafood platters on our annual trip to Myrtle Beach, and canned salmon. My grandmother, the one that was my mama, used the latter to make quick, easy, delicious, and filing salmon patties, what some people might call cakes or croquettes. I’ve loved them my whole life and they never fail to bring me comfort. I keep the ingredients on hand at all times.

Salmon patties were one of the first things I fed to my daughter when she had enough teeth to chew. I hope I never forget the image of her toddling around with one in each hand. Salmon patties turned out to be the last supper my grandmother ever cooked for me before she died. She didn’t cook much by that time, but she knew salmon patties by heart, and she knew my heart.

Don’t be tempted to fancy these up. The simplicity is the point. Some people eat them with ketchup or tartar sauce or hot sauce, but they do just fine on their own. 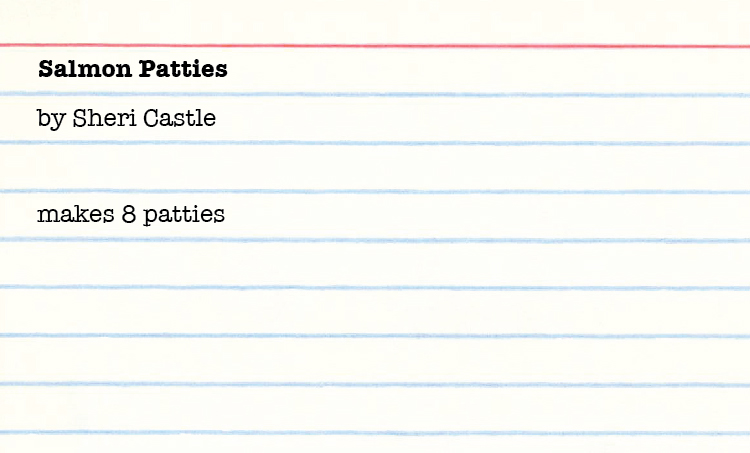 A generous pat of butter and splash of oil, for pan frying

Stir together the salmon, cracker crumbs, mayonnaise, egg, Old Bay, and pepper in a medium-sized bowl. Let stand a couple of minutes, and then stir until the mixture comes together and holds its shape on a spoon.

Shape the mixture into 8 equal patties that are about 2 1/2 inches in diameter and 1/2-inch thick.

Warm the butter and oil in a large skillet over medium-high heat. When the butter bubbles, add the patties in a single layer, spacing them evenly. (Work in batches if need be.) Cook until the patties are nicely browned and sizzling, flipping once, about 3 minutes per side. Serve warm, although they’re not half bad at room temp and can hit the spot pulled straight from the fridge.

Need something easy and comforting? Look no further than the traditional Jewish dish of Noodle Kugel. What is kugel, you ask? It is basically a baked casserole or noodle pudding made with egg noodles that came from German Jewish Ashkenazi roots. Pronounced koo-gull, the Yiddish name is the German word for “sphere” and reflects the dish’s humble beginnings. Some people (like me) make it sweet with cinnamon and pineapple, and others make it more savory with cheese, onion, and veggies in it. It can be served as a side with dinner or breakfast . . . or even as dessert. 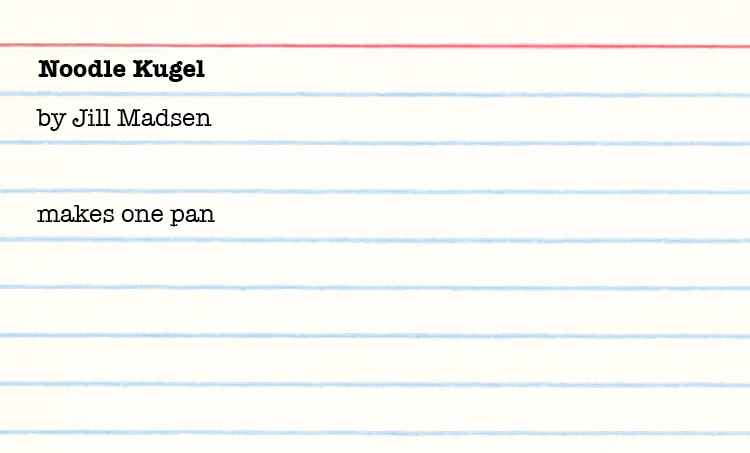 Drain pineapple and mix into noodles.

In a mixer, blend melted butter, cream cheese, sour cream, eggs, and sugar. Pour over noodles and mix. Pour noodle mix into the greased pan. Sprinkle cinnamon and brown sugar over the top.

Bake for one hour. Cut like cake pieces and serve with sour cream if you desire.

Bill Smith was born and raised in New Bern, North Carolina, and was the chef at Crook’s Corner for nearly three decades until his retirement in 2019. Smith is as well known for his sumptuous take on southern comfort food as he is for his exceptional food writing—including the New York Times Notable and Food & Wine Best-of-the-Best cookbook Seasoned in the South and the bestselling Savor the South title, Crabs & Oysters. A foremost chef-expert in southern foodways, he served for years on the board for the Southern Foodways Alliance. Also notable, his grounded commentary on Mexican immigrants has been featured in CNN’s Eatocracy, in Southern Cultures, the SFA’s Cornbread Nation, and in Garden & Gun.

Born in Watauga County, North Carolina, high in the Blue Ridge Mountains, Sheri Castle grew up a voracious reader, especially of cookbooks. She wrote her first recipe—for a smoothie she named the Hawaiian Tropic Sunset Delight—at the age of four, and submitted it to a local housekeeping television show. A completely self-taught cook, she started doing recipe development and ghostwriting cookbooks for numerous chefs across the nation. After nearly a decade writing in the voice of others, Castle published her own book, The New Southern Garden, in 2011. A prolific writer, Castle continues to publish books, recipes, and essays under her own name for brands including Southern Living and Le Creuset, and as a ghostwriter.

Jill Madsen is the CEO of the Jewish Federation of Durham–Chapel Hill, which includes the Levin Jewish Community Center, Jewish Family Services, the Jewish Community Foundation, the Israel Center, and the Jewish Community Relations Council. Jill began her career in the classroom working with young children at the Sabes JCC Early Childhood Center and then moved into administrative roles, blending her educational background with her love for strategic planning and program development. If you pop by the Levin JCC, you are likely to find one of her baked items at the JCafe.