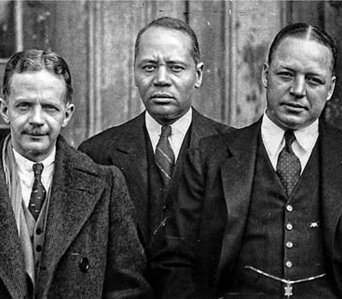 “Meier told me, ‘A Man Called White is worthless, nothing but lies.’ And then he walked off, unable, apparently, to suffer fools for much more than a minute.”

In 1989, I was a graduate student just beginning research on the life of the historian Rayford Logan. Perhaps best remembered for popularizing the phrase “the Nadir” to describe the trajectory of African Americans in the period between the end of Reconstruction and World War I, Logan (1897–1982) was a distinguished historian, Pan-Africanist, and civil rights innovator. A close associate of both Carter G. Woodson and W. E. B. DuBois, an early patron of Langston Hughes, and lifelong friends with, among others, the great poet Sterling Brown and civil rights legal pioneer Charles Houston, Logan is better known to the wider public for editing the 1944 collection of essays What the Negro Wants and authoring his 1954 classic The Negro in American Life and Thought. But he was also a prominent diplomatic historian who wrote prolifically on Haiti, the Caribbean, and Latin America, and on colonial Africa and the anti-colonial struggle. And as a politically engaged professor in the 1920s, 1930s, and 1940s at Virginia Union, Atlanta, and Howard Universities, he organized the first citizenship schools designed to help disfranchised African Americans navigate the considerable barriers to registering to vote. In the 1920s he was a leading organizer of the Pan-African Congress movement, and during WWII he was prominent in efforts to break down inequality in the military and defense industries and was centrally involved in negotiations with President Roosevelt to issue Executive Order 8802. Yet as a light-complexioned African American, he was also influenced by intra-racial color prejudice that manifested itself in both pernicious and idiosyncratic ways. For example, when the racial nomenclature began to change in the 1960s, he was known to terminate conversations—and even longterm friendships—when people used the word “black” to describe “Negroes.” His visceral reaction to “black” was often the first thing people who knew him commented upon when I interviewed them.

hula hoop around your heart