Well, we can all probably identify the moment at which our moods for 2020 shifted from the nurture of hopes to, at very best, the sober management of expectations.

Last December, as I was wrapping up a visit to my family in eastern North Carolina (the last such visit I’d be able to make, it turned out, for quite a while), my mom gave me a brown spiral-bound handbook: Presbyterian Pot Pourri, a cookbook published in 1984 by the women of the First Presbyterian Church of Whiteville, North Carolina. Given the season, I was in New Year’s resolution mode, unaware that the coming year would not be one conducive in the least to resolution-keeping—unless your resolution was to, say, socialize less. But at the end of 2019 I was resolved to make a church lady pound cake in 2020.

My family lived in Whiteville, my father’s hometown, for a few years when I was little before moving a couple of hours north and east. My Greek American mother grew up in Raleigh eating her mom’s flawless spanakopita and rice pudding—cooking achievements I regrettably never got to experience, as my grandmother Georgallis and I missed each other on Earth by about five days. My mom definitely carries on this culinary legacy, but having spent most of her marriage to my father in the state’s eastern parts she also appreciates a good Presbyterian meatloaf, which she made all the time when my sister and I were kids.

The recipe for that meatloaf is in Presbyterian Pot Pourri, as are those for many other childhood-familiar dishes: a sausage-and-egg breakfast casserole, skillet cornbread, and—the Holy Grail—Mary A. Tyndall’s sour cream pound cake. A family friend would bring us a version of this cake around the holidays —tall, baked in a tube pan, smelling of vanilla, with a flaking crust and ethereal interior. If I could come anywhere close to replicating this pound cake, I felt, my stock would go way up. My mom used a pink sticky tab to mark the page with that recipe, along with a few other highlights, and I packed the cookbook on my return to California, feeling uncommonly prepared to face the new decade.

Well, we can all probably identify the moment at which our moods for 2020 shifted from the nurture of hopes to, at very best, the sober management of expectations. Kitchen-wise, there were the shortages, the bulk buying, the grocery store strategy sessions, the smug New York Times recipes alleging to consist only of ingredients that you “probably already have on hand.”

I was in New Year’s resolution mode, unaware that the coming year would not be one conducive in the least to resolution-keeping—unless your resolution was to, say, socialize less. 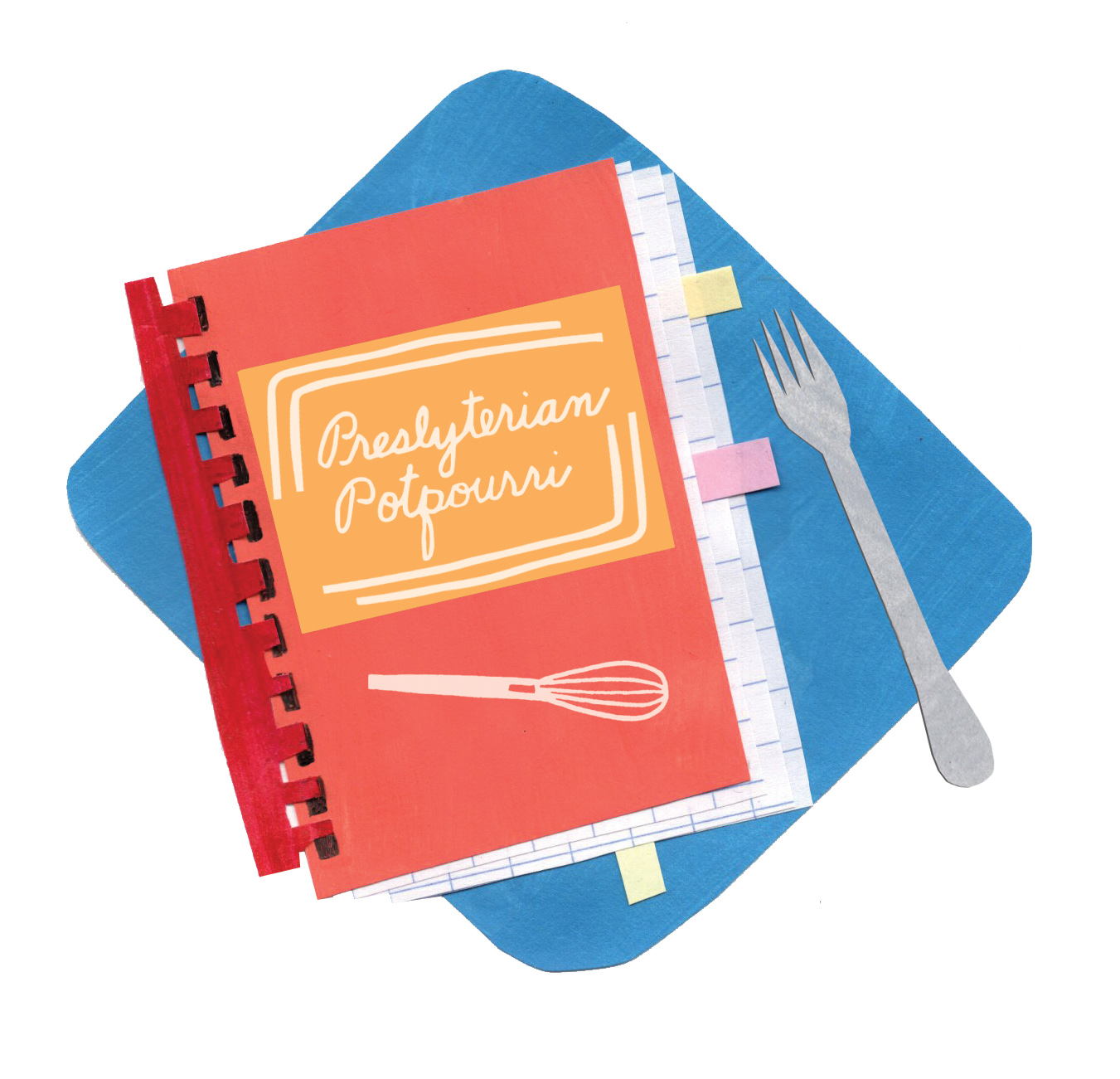 One night in April, remembering suddenly how the year was supposed to go, I pulled Presbyterian Pot Pourri off the cookbook shelf and took it with a glass of bourbon to the kitchen table. In the pages, people boldly climbed out onto some limbs: tomato soup salad, Welsh rarebit, “opera chicken,” “impossible quiche.” There was a recipe for “cheese soup,” whose list of ingredients did not include cheese. It finally surfaced in the directions, in the form of a pound of Velveeta, to be added following two cans of cream of chicken soup and one can of water chestnuts.

“That sounds like something you’d make when you’re stoned,” said my partner, stoned himself. “They should call that Stoned Cheese Soup.”

There were a series of “memory recipes,” a category I took to indicate something between condescension and an abdication of responsibility. More than a few dishes involved the word congealed. My only direct familial connection to a recipe was Becka’s Hershey Pie, named for my paternal grandmother, a very sweet lady who otherwise didn’t cook very much. I never ate a pie she made, but my mom made them occasionally. Besides the eponymous Hershey bar, it consists mostly of Cool Whip. (If the Presbyterians are God’s frozen people, the proof is in this cookbook’s dessert section.)

Along the bottom of the page Presbyterian Pot Pourri sometimes offered little italicized tips for solving housekeeping problems you didn’t know you had:

KITCHEN DEODORIZER: An inexpensive way is to put some orange or lemon peel in the oven at 350 D. with the door ajar.

To whiten laces, wash them in sour milk.

Spray garbage sacks with ammonia to prevent dogs from tearing the bags before picked up [sic].

Try waxing your ashtrays. Ashes won’t cling, odors won’t linger and they can be wiped clean with a paper towel or disposable tissue. This saves daily washing.

I decided the following week to make the meatloaf. It took some convincing. The other member of my household, who grew up in a Berkeley kitchen of grilled lean proteins and triweekly farmers’ market vegetables, had only encountered meatloaf in movies and believed it to be a gray, punitive food. Like most of the recipes in Presbyterian Pot Pourri, this one was instructionally pithy, leaving me to rely on visual memory and tactile instincts in following the direction to, after mixing the ground beef and onions and spices, Form into loaf. I didn’t have a casserole pan large enough to comfortably accommodate all the tomato sauce meant to be poured over the loaf once formed; it was nearly submerged in what looked like a primordial spa treatment. But the swamp cooked down, and I felt comfortable enough with the results to text a picture to my mom.

“Looks good,” she replied. “Need to chop the onions a little finer next time.”

It did kind of look like the loaf had been rolled in shards of broken glass. I tend to let impatience get the better of me in the mincing process. Fortunately, Charlene Hinnant’s meatloaf recipe is impervious to executive laziness.

Fortified by this success, I had the confidence to tackle the pound cake, which I decided to make for a special occasion over the summer (conveniently after the point in the year that flour returned to the grocery store shelves). I made the mistake of overhyping these plans in communications with my mom beforehand, providing numerous opportunities to be inadvertently psyched out. For a recipe so apparently simple, there is much treacherous terrain. If you over-mix the batter, it’ll be too dry, my mom warned by text. If you take it out of the pan too early, it’ll fall apart. I assured her I wouldn’t do any of that, then immediately googled “overmixed pound cake” and “pound cake cooling time.” 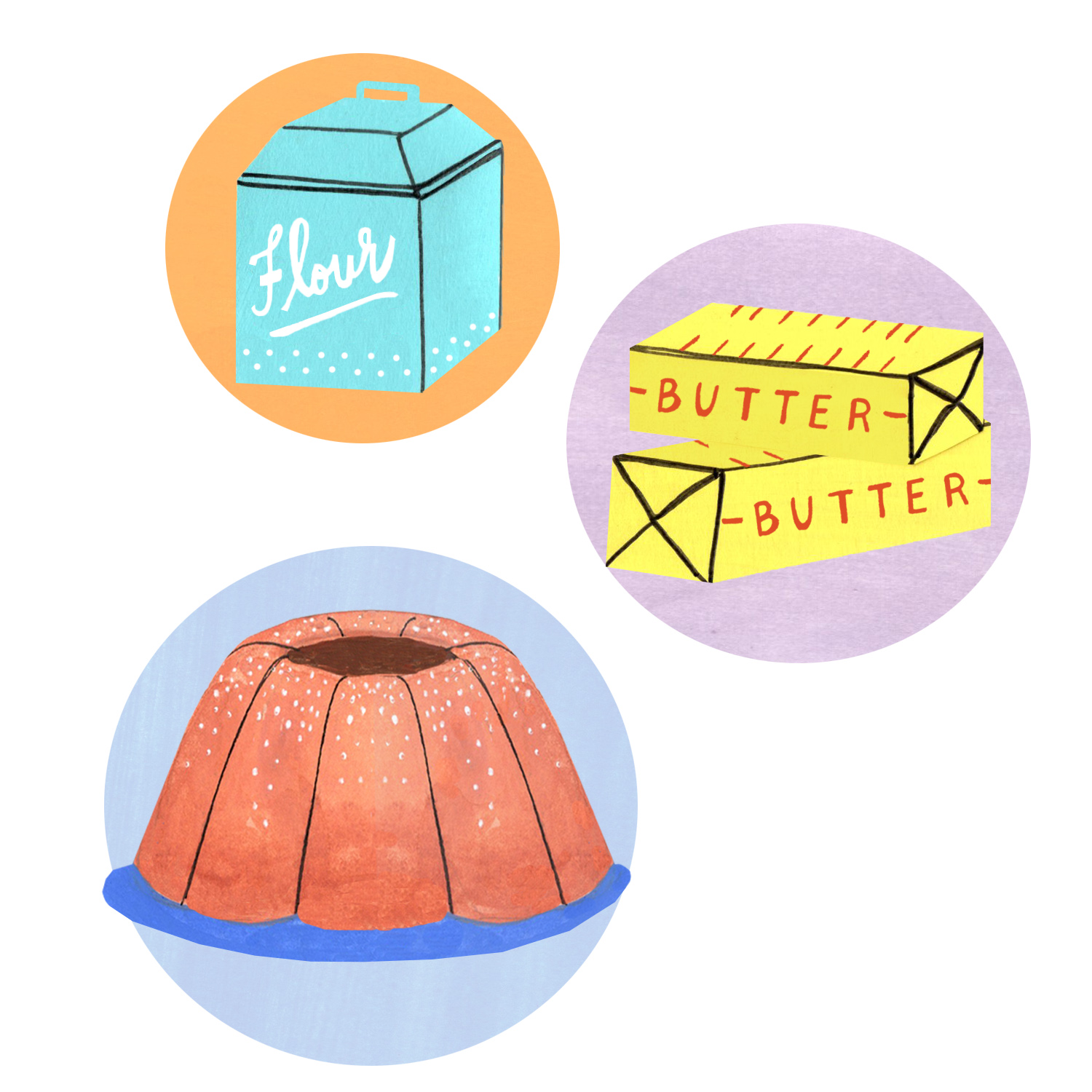 For a recipe so apparently simple, there is much treacherous terrain.

The evening arrived, and the prescribed two sticks of butter (no substitutes) had reached room temperature. After combining everything, fearful of over-mixture, I put the batter-filled tube pan in the oven, which Ms. Tyndall advised I was not to open for an hour. Once I took it out, I let the cake cool in the pan for fifteen minutes, and then flipped and extracted.

Really, in 2020, how could it have come out cleanly? Gobs of steaming fluff clung to the aluminum and what remained of the free-standing cake tilted. Always short one crucial kitchen item, I didn’t have a cooling rack, and cooling the cake on a cutting board induced an unsightly peeling off the top. (I realized too late that I’d been cooling it upside down.) I sent my mom a photo anyway.

“Looks great!” she gamely responded. “Need to cool it longer in the pan next time.”

So the cake wouldn’t win any beauty contests, but I didn’t make it to look at. It was delicious. My effort didn’t quite meet the confectionary perfection I remembered, but what are New Year’s resolutions for if not coming up short?

Resting on my laurels, after the last of the pound cake disappeared, I put Presbyterian Pot Pourri back on the shelf for a little while. I got it back out a few days before Thanksgiving, looking for a bit of casserole-related guidance. When I flipped to the index in the back, I found something I’d previously missed completely—the following recipe, credited to a 1944 publication called Reckoning at Dusk by one Mary Welch, for the “Bread of Fulfillment”:

One dozen fertile eggs of desire

One cup of honey of self-sacrifice

One teaspoon of leaven of hope

One-half cup of oil of joy

One-half teaspoon of salt of reason

One teaspoon of extract of humor

One cup of milk of human kindness

There is of course much to puzzle over between the apparently arbitrary measurements (one cup of self-sacrifice but only a teaspoon of hope?) and the occasionally cultish diction (fertile eggs of desire? oil of joy . . . ?). This being a Presbyterian cookbook, the instructions that follow involve some God stuff, which you can take or leave. They then conclude with a directive: When well done remove the product from the vessel of self and serve every crumb of your loaf to your neighbors. 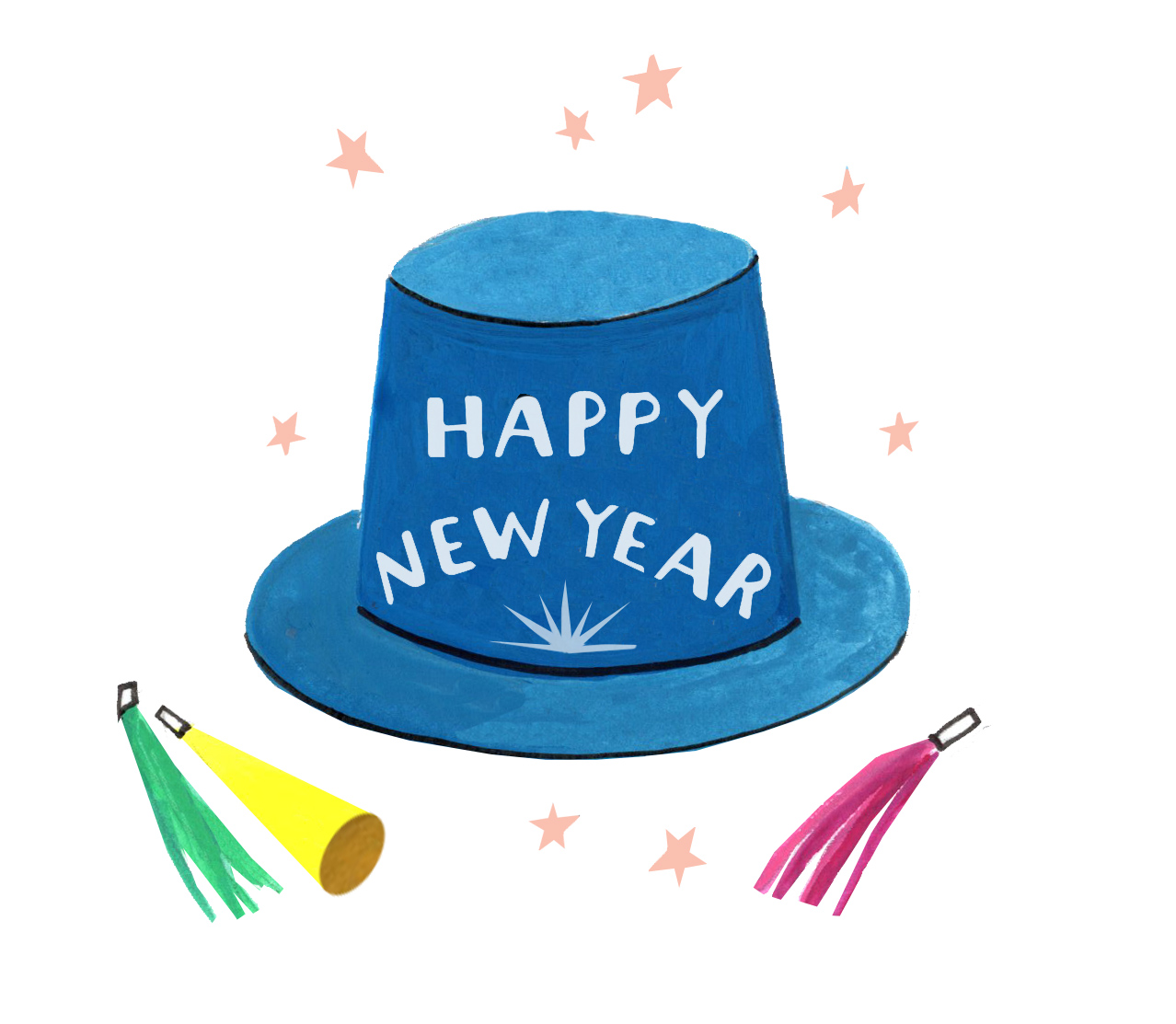 Still pretty cultish. But in the frayed and fragile state I’m in at the end of 2020—the state we’re all in—I can’t help extrapolating a bit and allowing myself to be a little moved by the thoughts of all the self-sacrifice leavened by hope, the crucial extractions of humor, the reason sternly salting all our desirous eggs—reactions possible thanks only to love refined in unselfish mills so that one day, hopefully soon, we can finally exit these damn self-vessels and reunite with our neighbors.

In an isolated year, with gathering places shut down across the world, a thirty-six-year-old cookbook provided me with something like fellowship: connecting me with my mother when I could visit her only on a screen, and proving that our congregations—families, neighborhoods, causes, sanctuaries—don’t simply survive restrictions on space or the passage of time but are built to overcome them. Here, at the end of 2020, having achieved my one resolution for the year, I look forward to when our present restrictions might be safely lifted, and we can give our congregations their proper festive appreciations. In 2021, I believe I’ll try waxing those ashtrays.

Katherine Proctor is a writer from North Carolina who lives in Oakland, California.

The Art of the Saltville Centennial Cookbook

“Peace and a Smile to the Lips”: Favorite Southern Food Dishes