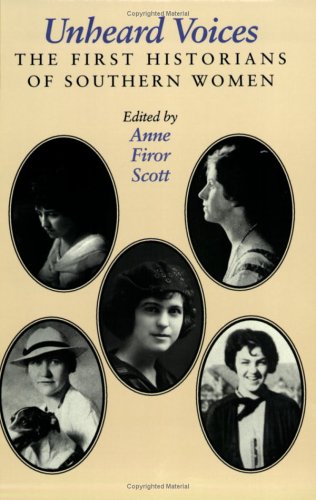 Unheard Voices introduces five pioneering scholars of the history of southern women to a modem audience, with essays (originally published between 1928 and 1941) by Virginia Gearhart Gray (1903-71), Marjorie Stratford Mendenhall (1900-1961), Julia Cherry Spruill (1899-1986), Guion Griffis Johnson (1900-1989), and Eleanor M. Boatwright (1895-1950). Anne Firor Scott’s introduction places their work and personal lives in a larger context, one framed by the struggle of an early-twentieth-century generation of women historians to make a significant contribution to scholarship. All five writers produced impressive monographs in the then undefined field of women’s history, but none received commensurate formal recognition from her colleagues or the profession in general during their most productive years. Only Julia Cherry Spruill lived to see later historians acknowledge and appreciate the significance of her work, beginning in the early 1970s. And so the irony noted in the book’s title: against great odds, each woman managed to find her own voice, only to realize that, for the most part, her contemporaries were not listening.