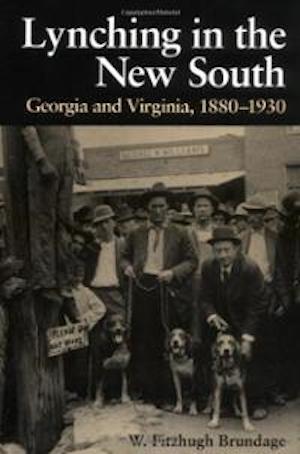 In 1897 in Alexandria, Virginia, an enterprising tobacco merchant placed an advertisement for his products in the most attention-getting spot in town—the lamppost above the body ofJoseph McCoy, an African American lynched for allegedly raping a white woman. Almost fifty years later in Tampa, Florida, another merchant used his Southern Lumber and Supply Company’s billboard to condemn vigilante violence. The sign proclaimed “Tar Today, Whitewash Tomorrow,” protesting a recent tar and feathering that resulted in the death of a white man active in third-party politics. In their recent works, both Fitzhugh Brundage and Robert Ingalls address the contradictory nature of the rapidly changing South, increasingly integrated within the national economy yet distinctive for its blatant brutality. Far from being a relic of the frontier past that “progress” would soon eliminate, violence became an established method of maintaining racial and class hierarchies between 1880 and 1930. Violence, Brundage and Ingalls argue, was modern.