"We should eat something different every year on Thanksgiving."

Let us consider the absurdity of our collective national decision to consume turkey on Thanksgiving. Not everyone serves it, but it is the cultural norm. My favorite alternative: In “A Charlie Brown Thanksgiving,” Charles Schulz’s Peanuts characters produce a kingly feast of toast, pretzel sticks, and popcorn. If the sight of little yellow Woodstock virtuously buttering toast fails to warm your heart, you probably do not have one. However, in our era of gluten-free stuffing mixes and keto pumpkin pies, Chef Snoopy’s all-carb menu is inconceivable.

Author Calvin Trillin has another idea. In his legendary essay “Eating with the Pilgrims,” the New Yorker writer makes a case for replacing the big bird with spaghetti carbonara. He argues that even though creamy pasta would be difficult to depict on Thanksgiving Day parade floats, it beats turkey, and besides, “Nobody knows if the Pilgrims really ate turkey at the first Thanksgiving dinner.” He is right. According to Plymouth resident and observer Edward Winslow although wild turkeys were prevalent in the region when the Pilgrims and Wampanoag Indians gathered in 1621, diary accounts only mention that “fowl” was consumed. Perhaps ducks, geese, or even swan were on the table. Swan—eeesch. Talk about your different cultural mentalité.

When you think about it, in a country with such political division as ours it is remarkable that any one dish, let alone turkey, has found a place at center table at Thanksgiving celebrations across the country. For that matter, we cannot come together to decide on immigration policy, and without a national commitment to that essential American cause, it is understandable that confusing mythologies abound regarding our nation’s “founding.” No less than George Washington and Abraham Lincoln have weighed in with proclamations about Thanksgiving, but the choice of turkey as our national dish remains a mystery.

My twelve-year-old son, Dylan, would be happy to school you on his theory behind Thanksgiving’s origins. His lecture, entitled “Why Do We Even Celebrate This Gross Holiday?,” goes this way: “The basis of the holiday isn’t exactly a good basis, considering what actually went down between the Native Americans and the Pilgrims. They didn’t have some big feast; there was just a lot of killing—and the loss of trust. We should have a different holiday. I think Thanksgiving really exists because of Black Friday.” This is a master class in two things: one, how a young person recognizes both injustice and the power of marketing; and two, ‘whitesplaining’—which may or may not be a necessary step in achieving the first. 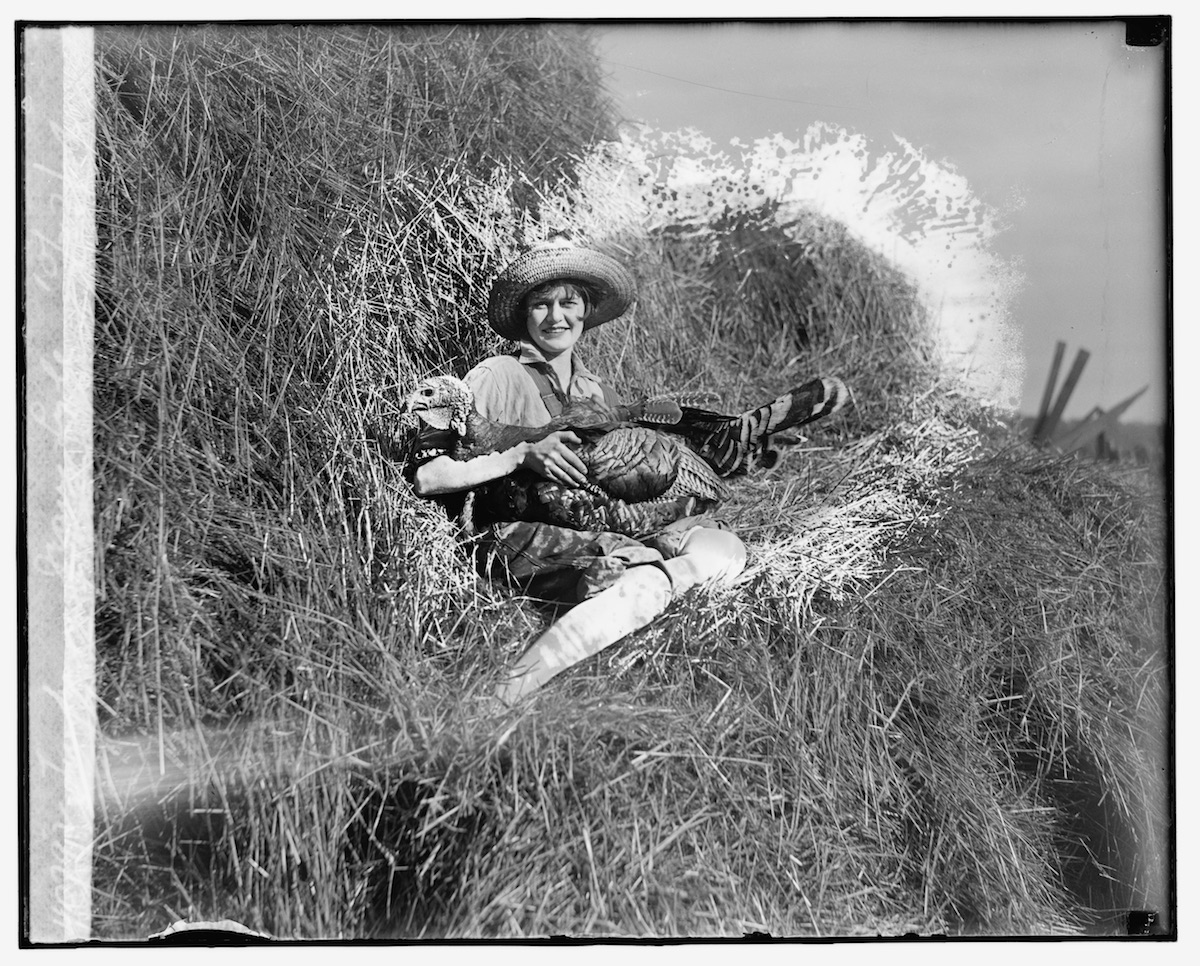 Turkeys, Jean Lyle, October 27, 1926, courtesy of the Library of Congress.

Whether we should still celebrate this holiday depends on whether you believe that there are more important things in the world than food. Since I do not, let us consider whether turkey captures what it means to be American in this moment—and if it does not, let us replace it with a food that does.

I have two proposals. First, we should eat something different every year on Thanksgiving. We should do this as a nation, keeping in mind the current ideological and political issues. We could have Instagram contests to decide on our annual national dish. How else should we have a national conversation but on Instagram or Twitter? My second proposal: We eat Popeye’s Chicken Sandwich for Thanksgiving. Everybody, Popeye’s. Let’s do it.

We should eat something different every year on Thanksgiving.

I know Anthony Bourdain, that beloved and now departed ethnographer of edible exotica, would agree. In an interview with Stephen Colbert in 2011, Bourdain boasted he was “going off grid” to eat in locales little known for their food like Haiti and Cuba. “Why not go places that have food?” Colbert asked. “You know, people ask all the time, ‘What’s the most exotic or unusual or grotesque food you’ve ever eaten?’ And I still maintain it’s pretty hard to beat, for sheer grotesqueness and bizarreness: Cinnabon,” Bourdain responded. Within our own American mall food courts, we have dishes far more exemplary of our national culture than turkey.

More evidence on this subject comes from a recent episode of Saturday Night Live. The set-up is standard Office-inspired humor: Host Harry Styles plays an intern of British extraction whose boss tasks him with picking up take-out for a celebratory company lunch. Styles announces his selection of Popeye’s popular new chicken sandwiches. “They don’t have one back in England, but it’s just like KFC, right?” Styles says. “No. No, it’s NOT,” responds Kenan Thompson, who plays one of two African American workers in the office. The gag goes on, in coded language that signals racial stereotypes: Styles explains Popeye’s is only a few blocks away “on Frederick Douglass Boulevard, between a liquor store and a Foot Locker.” Thompson grimaces. “Look here, I’ve got to level with you,” he says. “There’s not many things in this country where our people get first dibs, but the Popeye’s Chicken Sandwich? That’s one of them.”

Indeed, the Popeye’s Chicken Sandwich reflects distinctive attributes of American food culture as it pertains to race and to social media. Introduced in August and completely sold out within two weeks of hitting the market, the sandwich’s entire lifecycle has been mitigated by the internet. The food was introduced to the public by a tweet. Celebrities got involved; Cardi B Instagrammed a photo of herself eating a sandwich; Gayle King as well. An online Twitter war broke out immediately between Popeye’s and its competitor Chik-Fil-A, whose sandwich was “the original,” and which, frankly tasted better. Amidst the surge in Popeye’s sandwich’s popularity, it was clear that Popeye’s badly mis-guessed demand. There were not enough supplies to keep the outlets stocked with sandwiches. For weeks, customers searching for the sandwiches were treated to messages—online, and in stores—promising their return. Popeye’s violated basic economic principles of supply and demand—when you launch a new product you should have enough on hand to make sales. You might think this would anger consumers. However, in America we want precisely the things we cannot have. Demand for the non-existent sandwiches only increased. “One of the greatest things that happened with the entire sandwich launch was that all the demand that we had driven led Popeye’s to one of its best quarters in about twenty years,” Felipe Athayde, president of Popeye’s Americas division, said. 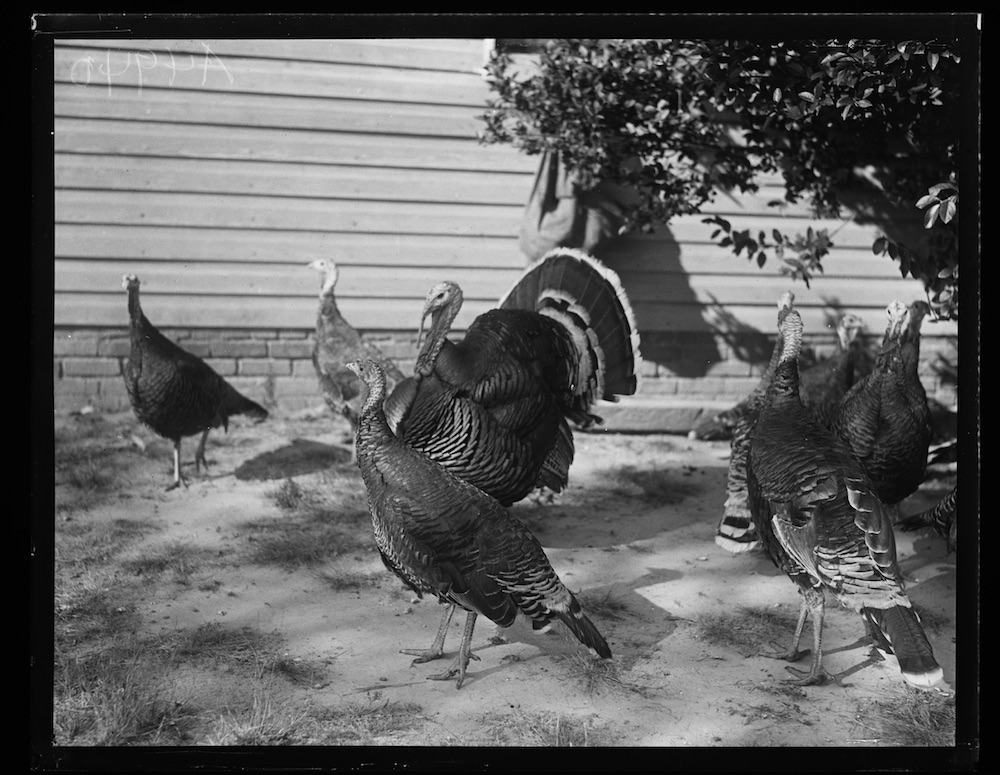 Turkeys, by Harris & Ewing, 1922, courtesy of the Library of Congress.

Yet there have been serious negative side effects. So much demand caused unprecedented levels of consumer competition. In Maryland, a twenty-eight-year-old man was stabbed to death after he allegedly cut in line to order a chicken sandwich. In California, a fight broke out in a drive-thru lane between two couples, all ordering chicken sandwiches. The people in the car in front were taking much too long to order. In response to traffic jams in and around a Popeye’s in Rutherford, New Jersey, caused by long lines of drivers waiting to order chicken sandwiches, local police installed an electric sign outside the restaurant that reads: “A sandwich isn’t worth a ticket. Do not delay traffic.”

What is lost in all of this, and what the SNL skit broadly hints at, are the racial politics embedded in a fried chicken sandwich no matter where it comes from or who makes it. So as not to ’splain you, too, I turn it over to Psyche Williams-Forson, chair of American Studies at the University of Maryland. Williams-Forson has written a critique of the perceived connections between black people and fried chicken. She historicizes the link’s origins to the Reconstruction era South, when the region lost most of its free labor and many black women took domestic service jobs in white homes. This, she argues, is how fried chicken became appropriated as a typical “southern food,” rather than being understood first and foremost as an African American specialty. Williams-Forson’s Building Houses out of Chicken Legs: Black Women, Food, and Power reframes the role of fried chicken in American culture through the African-American female experience, recasting it as a symbol of both hope and resistance. Consider the black women in Gordonsville, Virginia who called themselves “waiter-carriers” selling chicken to hungry customers in train cars, where they became models for African American entrepreneurship.

That is a symbolism I can get behind. As Trillin points out, for those of us on the cynical side of the Thanksgiving table, we enjoy recalling how unrelated to the Puritans we are. “It’s all very well to say that we should give thanks by eating the meal our forebears ate, but, as it happens, one of the things I give thanks for every year is that those people were not my forebears . . . I have been more and more grateful that none of my forebears got near this place before 1906. We had nothing at all to do with slavery or massacring Indians or the slaughter of the American buffalo or the assorted scandals of the Spanish-American War,” he writes.

I continue celebrating Thanksgiving because it allows us to take turns honoring our many forebears.

I continue celebrating Thanksgiving because it allows us to take turns honoring our many forebears. We put the “melting pot” metaphor to meaningful use with the different foods we enjoy at our tables. After this year’s Popeye’s fried chicken sandwiches, I know what I’m nominating for next year. It is a dish that comes from some of my own people, who, like Trillins’s, emigrated from Eastern Europe in the relatively recent past—I think of them as the Daughters of the Bolshevik Revolution. To honor the link to America’s newest political connections, next year at Thanksgiving let’s eat borscht. Na Zdorovie!

Header image: Woman in field of turkeys, ca. 1930, photoprint by USDA Extension Service, courtesy of the Library of Congress.

Kelly Alexander is a writer and an anthropologist based in Chapel Hill, North Carolina. She is a PhD candidate in anthropology at Duke, a writing instructor at the Center for Documentary Studies, and was an editor at Saveur magazine where she won a James Beard Journalism award for her magazine writing.