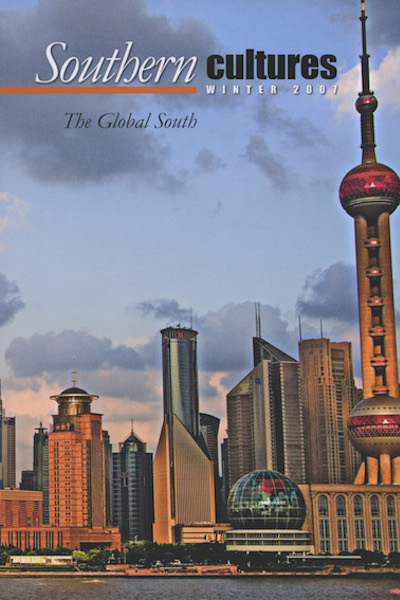 The South goes global! Southern industries, ideas, and ways of life spread around the planet, while the rest of the world comes to our backyard. Barbecue smuggles itself into the South long before the first Confederate map. Big Tobacco takes the South to China. There’s an old sport in town that’s now for locals, yokels, and new arrivals—cockfighting. New southerners immigrate from around the globe to make the South their home, and one of the South’s foremost restaurateurs even stocks his chef staff with immigrants who cook up the best southern specialties.

"The changes of recent decades have now brought America's most isolated region into closer contact with global influences than at any time in memory."

To Know Tobacco: Southern Identity in China in the Jim Crow Era

"Many southerners from rural areas did not yet have electricity or indoor plumbing in the early twentieth century. In Shanghai they encountered more modern amenities and an elaborate public nightlife, full of perfect strangers."

Your Dekalb Farmers Market: Food and Ethnicity in Atlanta

"While the culinary atmosphere of 1977 Atlanta may have remained 'traditional,' the city itself was hardly reminiscent of the romantic world Margaret Mitchell depicted in Gone with the Wind."

Bill Smith: Taking the Heat — and Dishing It Out — in a Nuevo New South Kitchen

"The Mexican guys said, 'Let me do it, let me do it!' and they were peerless."

Of Chickens and Men: Cockfighting and Equality in the South

"At the referee's signal, the handlers let their roosters go, and the birds, as if filled with sacred rage, assault each other in a hurricane of feathers, beaks, glittering spurs, and flapping wings."

Selling Which South? Economic Change in Rural and Small-Town North Carolina in an Era of Globalization, 1940–2007

"If national planners and the federal government first became interested in rural manufacturing as a development strategy in the 1930s and 1940s, the South had by that time been pursuing such a strategy for generations, albeit with mixed success."

The Institute and the Factory: Business Leadership and Change in the Global South

"We can't lead this world for long by making people afraid. It simply is impossible to succeed while being afraid."

“In My Heart, I’m an American”: Regional Attitudes and American Identity

There’s a Word for It — The Origins of “Barbecue”

"For all that southerners have made barbecue our own, the fact remains that this symbol of the South, like kudzu, is an import."