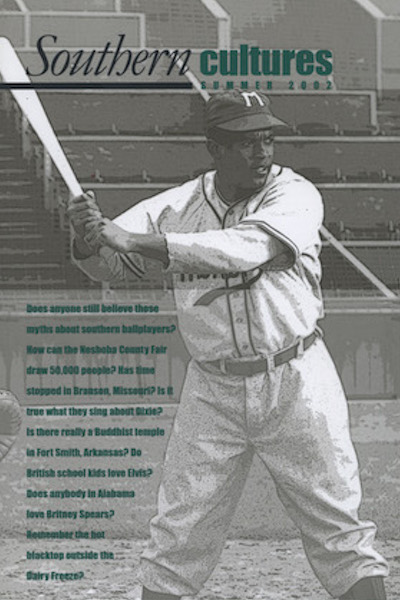 Does anyone still believe those myths about southern ballplayers? How can the Neshoba County Fair draw 50,000 people? Has time stopped in Branson, Missouri? Is it true what they sing about Dixie? Is there really a Buddhist temple in Fort Smith, Arkansas? Do British schoolchildren love Elvis? How much does Alabama love Britney Spears? Remember the hot blacktop outside the Dairy Freeze? All in Summer 2002!

Is Britney Beloved in ‘Bama? (Letters to the Editor)

"Accounts agree that the author of 'Dixie' actually came from Ohio, which just goes to show how nostalgia can flourish at a certain distance."

Is It True What They Sing About Dixie?

"'Won't-cha come with me to Alabammy, Back to the arms of my dear ol' Mammy, Her cookin's lousy and her hands are clammy, But what the hell, it's home.'"

"'No normal person could resist the gregarious contagion of this congenial event where merchants and farmers, visiting celebrities and natives met and mingled.'"

"'Jackie took a lot of abuse, but there was no violence. Even if you count hard slides with raised spikes, that was nothing compared to what happened in the 1950s and '60s during the Civil Rights movement.'"

Our Lady of Guadeloupe Visits the Confederate Memorial

by Thomas A. Tweed

"Some observers have trumpeted the South as the last stronghold of faithful Christian witness; H. L. Mencken dismissed it as 'the bunghole of the United States, a cesspool of Baptists, a miasma of Methodism, snake-charmers, phony real-estate operators, and syphilitic evangelists.'"

The Pond in Summertime

"She is AM radio. Chevrolet. The hot blacktop outside the Dairy Freeze."

Back to Branson: Normalcy and Nostalgia in the Ozarks

"Even Elvis promoted himself as just a simple country boy with rural, small-town virtues."

The Press and Race: Mississippi Journalists Confront the Movement (Review)