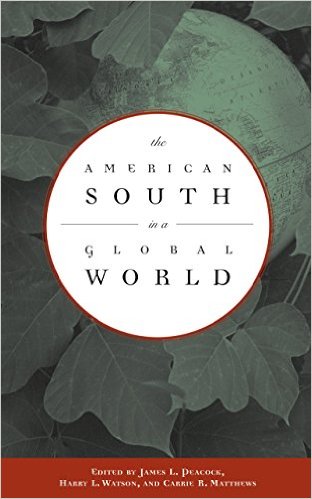 Between 1763 and 1767 Charles Mason and Jeremiah Dixon led an expedition to survey the boundary between Pennsylvania and Maryland. During the slave debates leading up to the Civil War, the so-called Mason and Dixon Line became the unofficial northern border of the South, the boundary between slaveholding and non-slaveholding states. So the South has a traditional border in the form of a northernmost reference point—a place to be south of—but its other borders have always been and continue to be uncertain. Three new scholarly collections suggest that, on a transnational level, the South’s borders may be more ambiguous now than ever before: The American South in a Global World, edited by James L. Peacock, Harry L. Watson, and Carrie R. Matthews; Globalization and the American South, edited by James C. Cobb and William Stueck; and Look Away! The U.S. South in New World Studies, edited by Jon Smith and Deborah Cohn. Collectively, these books discuss how globalization—the process of advancing international economic and cultural exchange—affects the South, a distinct region with a reputation, somewhat undeserved, for isolationism.