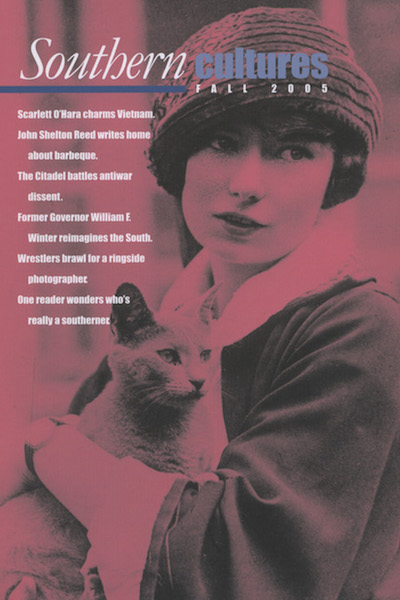 In this issue, we teach Gone With the Wind in Vietnam, queue up for Q in London, investigate the antiwar movement at the Citadel, reimagine the South with Governor William Winter, and get to the heart of small-town wrestling in Tennessee.

Who Is a Southerner? It’s Your Turn to Tell Us (Letters to the Editor)

"'You seem to be saying that the Beverly Hillbillies and The Dukes of Hazard types are the real southerners.'"

"Appearing in thirty million copies worldwide and almost two hundred foreign editions, the story of Rhett and Scarlett had conveyed something irresistible to readers almost everywhere, surely including many who couldn't tell Stone Mountain from Mount Rushmore."

Teaching Gone With the Wind in the Socialist Republic of Vietnam

by Mart A. Stewart

“An Oasis of Order”: The Citadel, the 1960s, and the Vietnam Antiwar Movement

"Pat Conroy, a 1967 Citadel graduate, recounts the horrors of his freshman year in gruesome detail. In My Losing Season, Conroy describes the plebe system he endured as 'mind-numbing, savage, unrelenting, and base.'"

"The crowd was at a fever pitch, seemingly waiting for an excuse to tear something apart. Would it be me?"

“Shooting the Breeze” and “Chiaroscuro”

"Only later would I learn / about the great-winged vultures the long-gone pharaohs deified. . ."

Queuing up for Q in London’s East End

"He remembers seeing a man from the Church of Christ cooking a steer with some apparatus involving chicken wire, an oil-rig pipe, and a hole in the ground. He also remembers playing cowboys and Indians with a young Billy Clinton."

"Now it is time to talk about what we are called on to do in this latter day South. Now it is time for us to have an accounting of just where we are."

by David A. Davis

Halls of Honor: College Men in the Old South (Review)