On the Hook with Ricky Moore

Interview by Southern Cultures, with a film by Jesse Paddock and photos by Baxter Miller

I like barbecue, make no mistake about it. I go to a pig picking. But we have an entire coastline that is not celebrated in the same light.

My name is Ricky Moore, I’m the chef, owner, and chief rocker of Saltbox Seafood Joint, located in Durham, North Carolina—Bull City, U.S.A. My family came from Riverdale and they all moved to New Bern—a little small town, very historic. It used to be the capital of North Carolina way back when. New Bern is situated on two rivers—the Neuse and the Trent.

I grew up with my grandmother, so it was a household full of uncles and aunts essentially. We used to head down to the beach. There’s a national park called Croatan—it was somewhere in between Havelock and New Bern. But we used to go there and go swimming and also go floundering and go crabbing and that sort of thing. Every now and again my grandmother would take a pole with a line on it—very basic bamboo with a hook on it and some worms. And we would catch, you know, thin fish like mullet or croaker and stuff like that. We caught it, split it down the back, and fried it, you know. Very standard stuff in a skillet—never deep-fried, always seasoned in cornmeal and flour, always with some sort of potatoes. Frankly, it was never the traditional slaw and hushpuppy sides, it was always something else. Could have been sweet potatoes, could have been rice and lima beans. But when we ate fish that’s what it was—it was not filleted at all. If you caught them that was what you did—you fried them all up right then and there. You didn’t wait, you didn’t put them in the freezer, none of that. So the chore was finding people to clean it. That’s a whole different ball game. Obviously everybody wants to eat, but nobody wants to clean cause it’s messy. Somehow it got done. 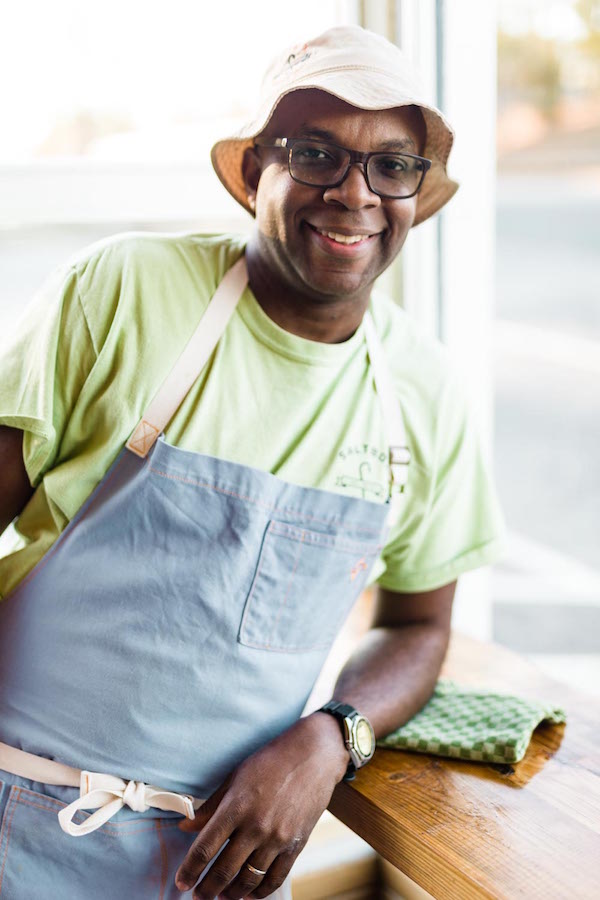 You know, I’m kind of like an evangelist for this bonefish thing right now.

I’m the oldest grandchild, so I grew up kind of with my uncles and aunts. I ate what everybody else ate. There was no kids’ meal. There was supper or dinner and that’s what you ate. And sort of as a right of passage, if you ate the bonefish and you got choked, you were coached into working it out. So either you got some cornflakes or some bread and you got hit on the back profusely [laughs]. Now hopefully you didn’t get traumatized. I didn’t, but some people do. You know, I’m kind of like an evangelist for this bonefish thing right now because I think it’s important. I think it’s first of all sustainable, if you really speak to the truth of it. There’s a degree of doneness when you cook bonefish and that’s called fried hard. It doesn’t mean crispy. It means you cook the fish, you fry it to the point where everything is crunchy, and you can enjoy eating the dorsal fins and the tail. Now it doesn’t mean it’s dried out, it just means you could get a higher temperature and you keep it in the fryer a little bit longer, and that’s the joy of eating bonefish. That also helps to minimize the danger of getting choked on the bone cause it’s fried so hard.

There was a time when mullet was like the bomb fish because they had the whole mullet run, that sort of thing. Right now, I’ve got to say croaker’s the chief rocker. In my opinion, people got to be talking about that fish more. It’s a fun word to say. Croaker. I mean, come on, man, that’s a cool name for a fish. Croaker [laughs]. Croaker is very full-flavored, not too oily, a little nutty when you cook it. This is a good introductory bonefish, if you plan to eat bonefish. If you like croaker, you can deal with everything else. Croaker, spot, butterfish, hogfish, mullet, all those fish that are designed to eat whole. That’s our stuff, man, and we need to be celebrating it.

Croaker, spot, butterfish, hogfish, mullet, all those fish that are designed to eat whole. That’s our stuff, man, and we need to be celebrating it.

I like barbecue, make no mistake about it. I go to a pig picking. But we have an entire coastline that is not celebrated in the same light. There are so many different was you can celebrate. Whether it be political, whether it be a graduation, a wedding, or you won the state championship—you have a pig picking. Well, you know, you should have a fish fry, too, right alongside of it. You should have an oyster roast right alongside of it. We should have a crab boil right alongside of it. And also, crabs, you know—we get cut out of that, too. A lot of the crabs caught in our area go up north. But we’re not celebrated for that, or we don’t make a sort of cultural food item. Hard blue crabs cleaned out, maybe soaked in some salt water, something like that, and dipped in sort of tempura-ish batter, but a little thicker. You fry them and you break them open, and they’re delicious. That’s another very Eastern Carolina thing particularly. 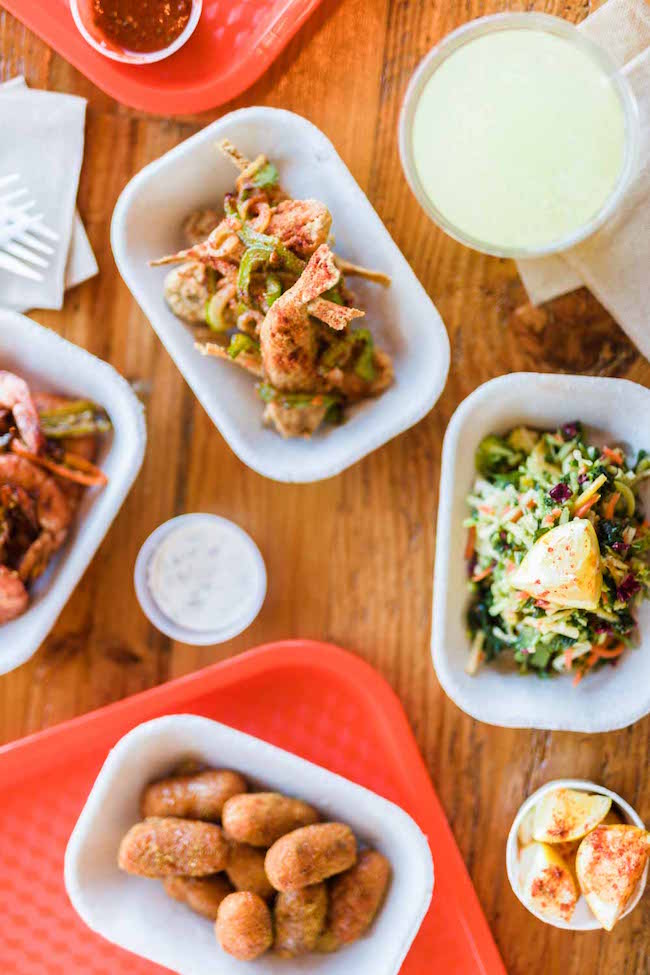 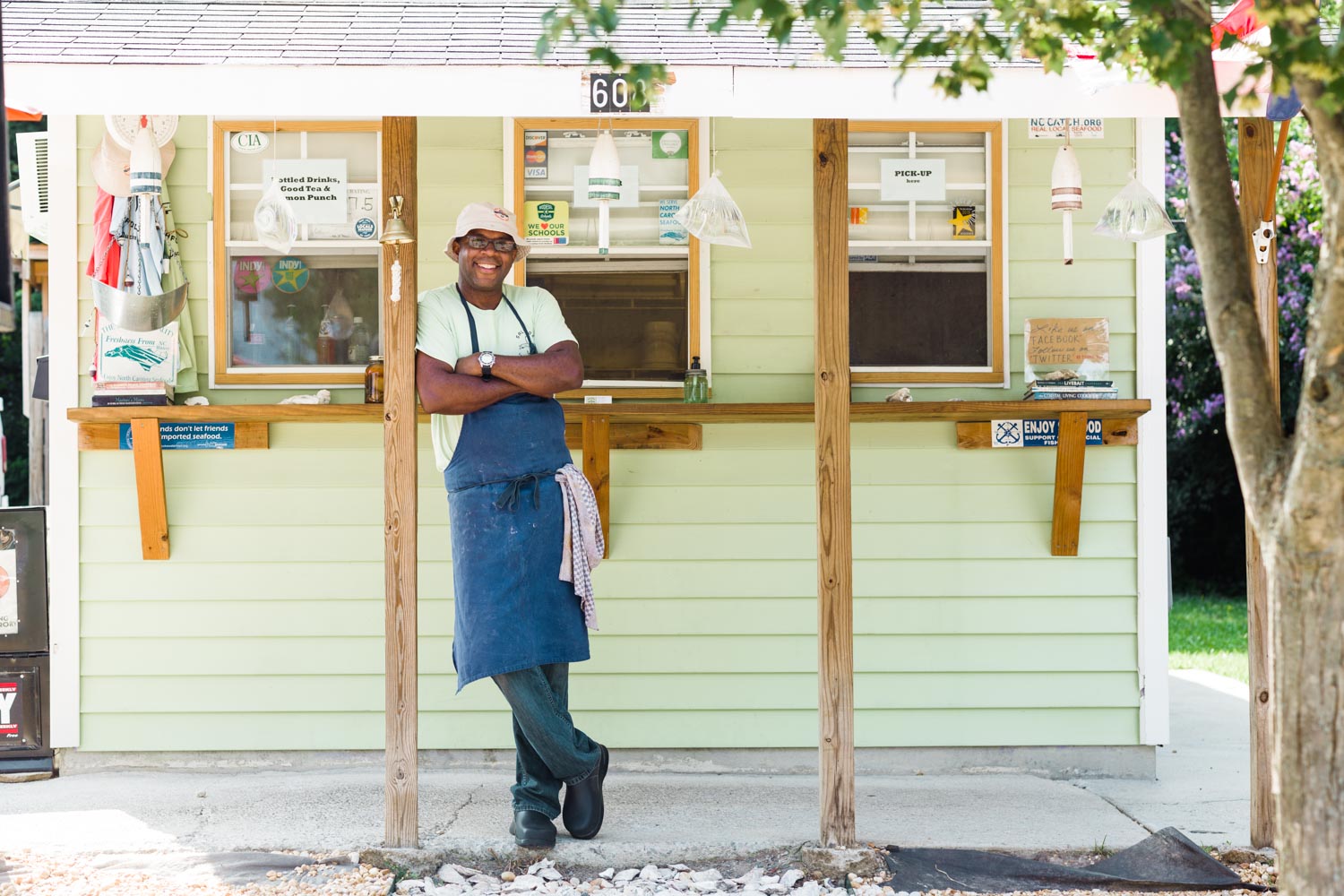 When you’re away from home, that’s the only morale booster. You’ve got to have some good eats, man.

Growing up I worked in a lot of food [jobs], I worked in the grocery store, the Piggly Wiggly. I worked in the produce area, so did the produce and it was local stuff. I worked in a fish house, Friday’s 1890. Home economics. I took the class because I wanted to eat. They were making meatloaf, so I wanted to eat, man. When I left high school I didn’t want to be a chef. I didn’t know I was going to do that at all. [I] joined the military—paratrooper, gung ho, I wanted to be adventurous—and fell into the kitchen and started loving it. When you’re away from home, that’s the only morale booster. You’ve got to have some good eats, man.

I’ve spent some time in Singapore—for me, one of the best places in the world to eat. But a lot of the eateries are like these little hawker stalls. They’re not full service restaurants, they’re not anything ultra fancy, they’re a little place where somebody in there is producing one dish real good, and that’s all they want to do. So I think that also inspired me. I said, “That’s a good way of approaching this. A small environment.”

I had a lot of ideas, but my wife asked me the question. She said, “Hey, where do I get a good fish sandwich from?” I didn’t have an answer. I said, “Maybe I should do that.” She’s from a fisherman family as well—her grandfather was a fisherman. So after that I said maybe I should do a concept centered around North Carolina seafood. The idea of building this brand around North Carolina seafood was real important. I feel like there are people in the market who cook seafood, but I feel like there’s a space where people weren’t talking about it with a level of reverence. So that’s kind of the backstory to Saltbox. I don’t want to be too much of a preacher, but I also want folks to know that we have a resource here they should be consuming.

The idea of building this brand around North Carolina seafood was real important. I feel like there are people in the market who cook seafood, but I feel like there’s a space where people weren’t talking about it with a level of reverence.

You know, as a cook, I know the fundamentals of cooking. I know what it means to hone in on a technique or how to season something correctly or how to utilize a season. I obviously know how to butcher fish, that’s a whole different skill set. But I wanted to make sure that Saltbox wasn’t just another fried fish place. And what that meant was me understanding quality, me understanding technique, me understanding flavor. I like people to cook food like they mean it, and I think that’s where I’m at. I need to let you know that it tastes good. I want you to know that I put some time and thought into it. I cook food because I mean it. 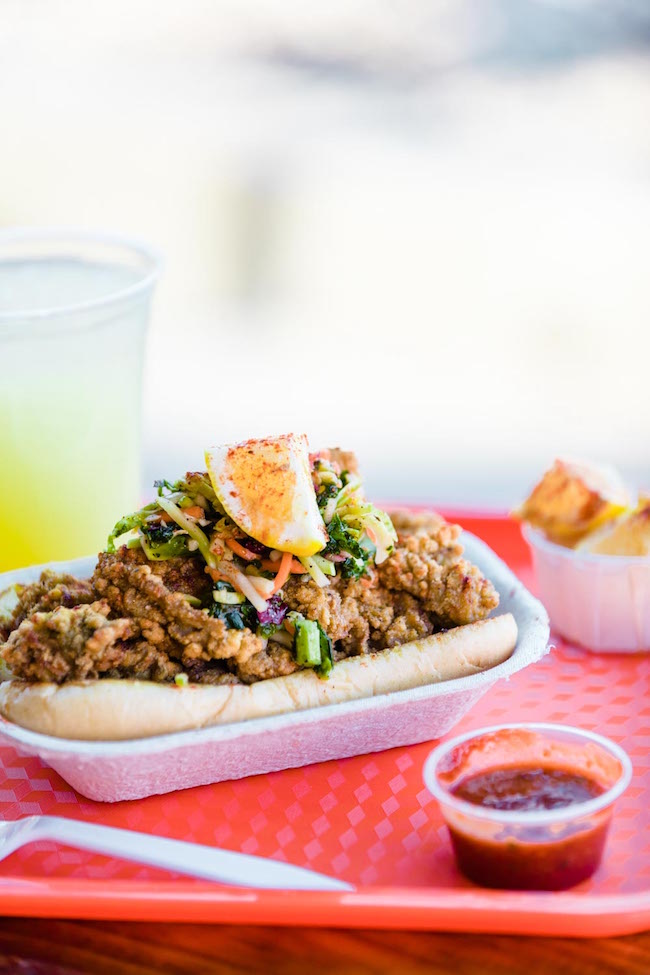