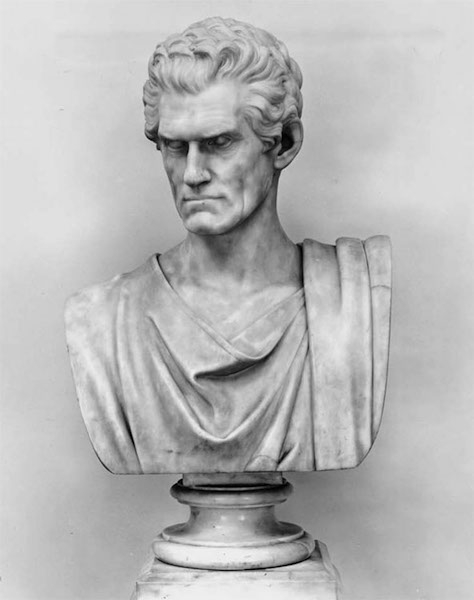 Courtesy of the North Carolina Museum of Art.

"'On a shelf behind the speaker's desk, was a marble bust, on the base of which in relief were the words "John C. Calhoun." Poised on its crown, was an inverted inkstand, whose contents had descended in copious streams over the face . . . Under the name, in pencil, was written this explanatory clause. 'Yes, father of Secessionism'."

The North Carolina Museum of Art first opened its doors in April 1956. That same month the museum received from the North Carolina Hall of History a marble bust of John C. Calhoun by the American sculptor Hiram Powers (1805–1873). Apparently, the Hall of History, later renamed the North Carolina Museum of History (NCMA), had little use for a bust of the seventh vice president of the United States. Though the preeminent statesman and political theorist of the Antebellum South, Calhoun was, after all, a South Carolinian. Also, the sculpture was damaged, the purity of its Tuscan marble surface marred by unsightly yellow stains of unknown origin. Even the provenance of the bust was a mystery: the Hall of History had no record of a donor. The Museum of Art accepted the sculpture without much enthusiasm, consigning it to the secondary “Study Collection.”

Make Work About It