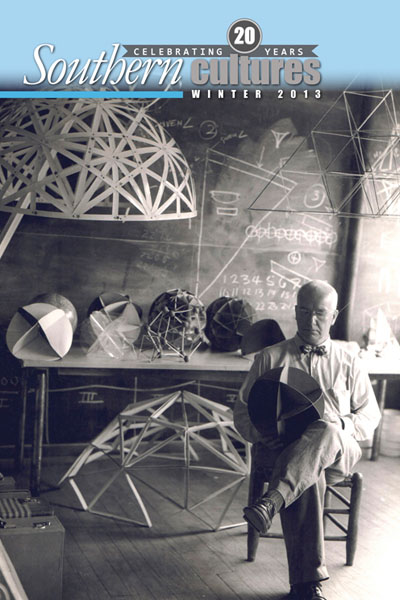 How did we get here? Lebanese in Mississippi, Puerto Ricans in Orlando, Californians at Black Mountain, Tennesseans in Texas, and a bust of a South Carolinian that ended up in the North Carolina Museum of Art. The Winter 2013 issue tells the stories of southerners far from home, making new homes where they land.

"Our definitive experiences come not from the identity of a monolithic region but, rather, from the details overlooked in our too-frequent generalizations about the capital-S South."

"'On a shelf behind the speaker's desk, was a marble bust, on the base of which in relief were the words "John C. Calhoun." Poised on its crown, was an inverted inkstand, whose contents had descended in copious streams over the face . . . Under the name, in pencil, was written this explanatory clause. 'Yes, father of Secessionism'."

"Crossing the Mississippi River, putting my head out of the window to stare at its broad muddy width—the last boundary of my well-known southern world—I left Tennessee."

"'Son, I don't care if you have to sell peanuts on the street, you work for yourself. Don't make another man rich.'"

"'And where do I fit here? For the Floridian, all Hispanics, all who speak Spanish, are a mix of black and white and of no use . . . It's a very, very delicate position.'"

"Almost everyone there at this period seemed a poster-child of some sort, representing a fragment of our culture—the closet gay, the civil rights activist, the communist, the avant-garde painter, the urgent truth-seeker, the parent-escaper."

There’s No Crying in a Tobacco Field

"That archaic system of child labor that often sent me home bleeding at thirteen or saw me faint from heat exhaustion at sixteen seems terribly oppressive and immoral to one who never lived it. Ask tobacco kids how they remember it, and they will paint a radically different picture."

"for smooth-talking Negro boys from Chicago more equal than separate . . ."

The House on Diamond Hill: A Cherokee Plantation Story by Tiya Miles (Review)

by Drew A. Swanson