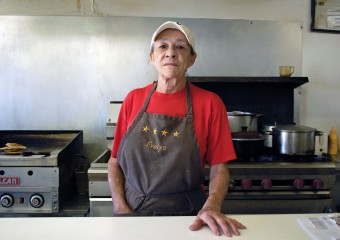 "Lumbees are not a stereotype. We're Indians, southerners, and Americans, all at once and without doubt . . . We don't forget, even though others have largely forgotten, the role of Indian people in creating what we now know as 'southern' food."

In the 1990s I made a short documentary film about Lumbee Indian gospel music, a topic that addressed one of the perennial questions about Lumbees: how can we be “real Indians” while looking, acting, and talking so much like other southerners? The best scenes were the ones with the music and the food, at my grandparents’ house, down a dirt road just north of Pembroke, North Carolina. On Thanksgiving, the day we were filming, my cousin described for me the question he got about Lumbees: “What kind of food do you all eat?” they ask. “Well, I like my mom’s fried chicken the best,” he says. “That’s our food, that’s Lumbee food.” The real question these well-intentioned folks are asking is, “How can you be Indians if you don’t fit my stereotype?”