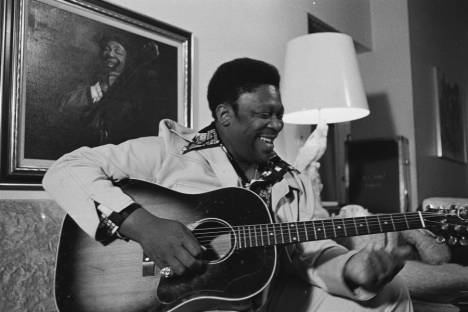 I think this is how the blues actually started. During slavery, they didn’t always think in terms of God freeing them because they were being sold and separated from their families. Many things of that sort were happening to them, and singing to God didn’t seem to do much good. So they would sing about it, but not to a heavenly body. They were singing to the bodies down here on earth. A lot of the chanting and singing was to warn other people in the field that the boss was coming or something else was happening.

The earliest sound of the blues that I can remember was in the fields, where people would be picking or chopping cotton. Usually, one guy would be plowing by himself, or take his hoe and chop way out in front of everybody else. You would hear this guy sing most of the time—just a thing that would kind of begin, no special lyrics, just what he felt at the time. The song would be maybe something like this:

And you could hear it, just on and on like that. Another early sound that I used to hear was my uncle Jack Bennett. Uncle Jack would go out early evenings, and on his way back home at night, you would hear him sing that same kind of thing. Let’s see if I can remember one:

“If I don’t get home in the mornin’, things are gonna be all right.”