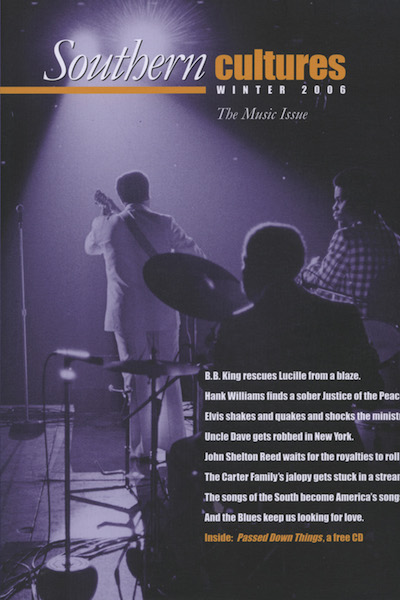 B.B. King rescues Lucille from a blaze. Hank Williams finds a sober Justice of the Peace. Elvis shakes and quakes and shocks the ministry. Uncle Dave gets robbed in New York. John Shelton Reed waits for the royalties to roll in. The Carter Family’s jalopy gets stuck in a stream. The songs of the South become America’s songs. And the Blues keep us looking for love.

"Little about the South has meant more to southerners than their tunes."

"I almost lost my life trying to save my guitar."

"They stopped at a gas station in Andalusia, Alabama, and found a justice of the peace who had a Bible and the right forms to fill out and on top of that was sober."

"Does love have the power to heal our blues?"

"We got the feel of the blues, the togetherness of funk music, the conviction of gospel music, the energy of rock, and the improvisation of jazz."

"Presley faced criticism from ministers about his lewd performances."

"The Blue Yodeler's first royalty came out to $27."

Doc Watson on the Cicada Concert

"I wish they'd get tired of tuning and play."

"American popular culture would be unimaginable without the music created by the South's disfranchised, impoverished, and forgotten peoples."

"He left the shop stunned and went back and wrote in his diary: 'Robbed in a New York barbershop—$7.50!'"

"Songwriter and singer Dorsey Dixon was never supposed to live."

"I proudly sent the lyrics off to a friend with connections in the country-music business, asking him if he didn't agree that it was a natural-born hit."

"They lit out over the bad roads, and the family car broke down in the middle of a stream."