After the Backcountry: Rural Life in the Great Valley of Virginia, 1800-1900, ed. by Kenneth E. Koons and Warren R. Hofstra (Review) 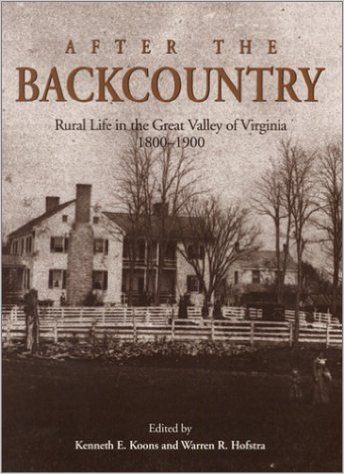 After the Backcountry, ed. by Kenneth E. Koons and Warren R. Hofstra (University of Tennessee Press, 2000)

After the Backcountry: Rural Life in the Great Valley of Virginia, 1800-1900, ed. by Kenneth E. Koons and Warren R. Hofstra (Review)

The Valley of Virginia lies along the state’s northwestern edge, bordering both West Virginia and Maryland, and consists of a broad, lowland expanse between the Shenandoah and Blue Ridge mountain chains, watered for at least part of its length by two forks of the Shenandoah River. Geographically, the Valley served as a natural corridor of migration from the middle Atlantic colonies into the southern backcountry in the eighteenth century, and as such developed a distinctive character that was only marginally southern. Socially, culturally, and demographically, the Valley has often been perceived as an extension of Pennsylvania, settled largely by Scots-Irish and Germans moving down from the north. They imposed on the region not only an ethnic diversity unlike that of other parts of the South, but an agricultural economy of mixed grain and livestock production that was more mid-Atlantic than southern in nature.