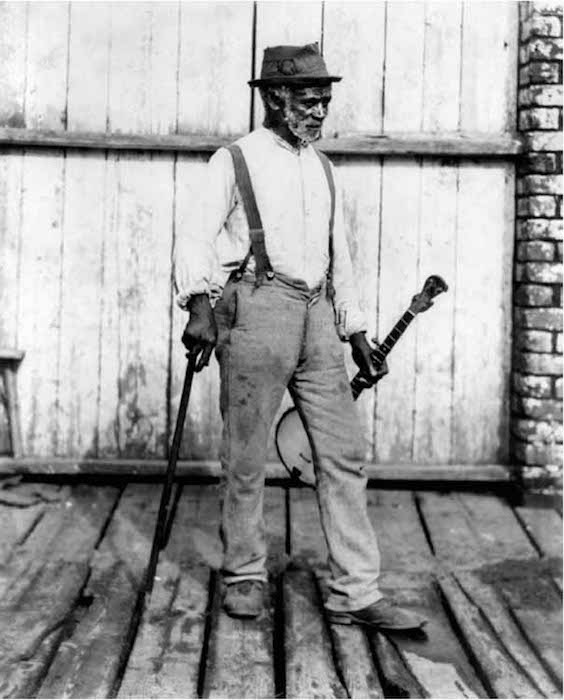 A Savannah minstrel, ca. 1905, courtesy of the Collections of the Library of Congress.

by Christopher J. Smith
Southern Cultures, Vol. 17, No. 1: The Irish

"One of the realities of American life is that certain features of African American performance style will remain strange and alluring to those outside the culture. Not least among such features is the making of hard social commentary on recurring problems of life, often through cutting and breaking techniques—contentious interactions continually calling for a change of direction."

Environments—geographical, demographic, historical, and contextual—have played a key role in American popular music, particularly in the case of minstrelsy, the nineteenth-century black/white synthesis that lies at the root of vaudeville, tap-dance, Tin Pan Alley, and musical comedy. Scholars have identified the role played by shifting antebellum conceptions of class, race, and politics in the creation of blackface minstrelsy, and the way the idiom ritualized or contested these conceptions, but, with a few brief exceptions, they have neglected the physical environments—the contested public spaces—in which the blackface synthesis first occurred. Place—particularly the boundary spaces of maritime and riverine environments on the southern and western frontiers of antebellum North America—was a key element in shaping the Anglo-Irish/African American cultural collaboration that made blackface minstrelsy possible. Received musicological history has depicted blackface as a phenomenon of northern urban environments, but this is to neglect the frontier contexts that both enabled black-white-creole cultural contact and provided inspiration for the first generation of blackface practitioners. As in the urban North (on the wharves of New York, Boston, and Philadelphia, and the rivers and new canals of the North-east and the “Old Frontier”), so on the landings and in the markets of the Ohio and Mississippi rivers, and harbor towns like Charleston, Savannah, and New Orleans: slaves, free blacks, and poor whites came together in a mutable, fluid, working-class environment in which tunes and dances, gestural and verbal languages could be—and were—borrowed, stolen, and combined.