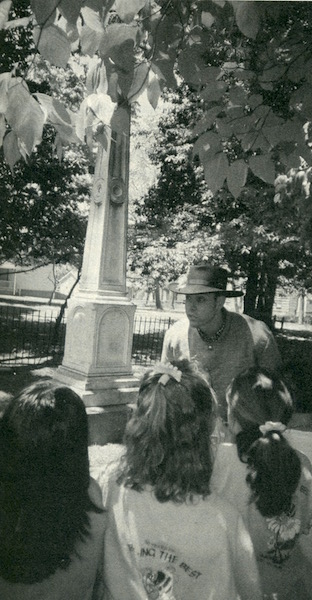 A Sam Davis reenactor at the Sam Davis Home, courtesy of the Rutherford County Convention and Visitors Bureau.

"Today, you can even get married at the Sam Davis home. Apparently some couples see no irony in tying the knot at a shrine to a lost cause."

On a recent Confederate Memorial Day at the Tennessee State Capitol, the General Joseph E. Johnston Camp No. 28, Sons of Confederate Veterans (scv), performed a pathetic little ceremony under the portico of the antebellum building. A small band of die-hards, their numbers were more than doubled by curious tourists, conscripted children, and an entertainment troupe called the Dixie Picks. A history professor from a local community college began proceedings with an angry and passionate recitation of Father Abram Joseph Ryan’s poem to the battle flag. Turning southwards, the speaker pointed to the statue of the Confederate martyr Sam Davis, erected on Capitol grounds in 1909, and proclaimed that the story of the “boy hero” was “a living reminder of the valor of your flesh and blood.” Executed by the Union army in 1863 for scouting behind enemy lines, Sam Davis had become a folk hero by the end of the nineteenth century; almost Christ-like in his representation of duty, bravery, and honor, he embodied the South’s idealized image of itself during the crisis of the 1860s.