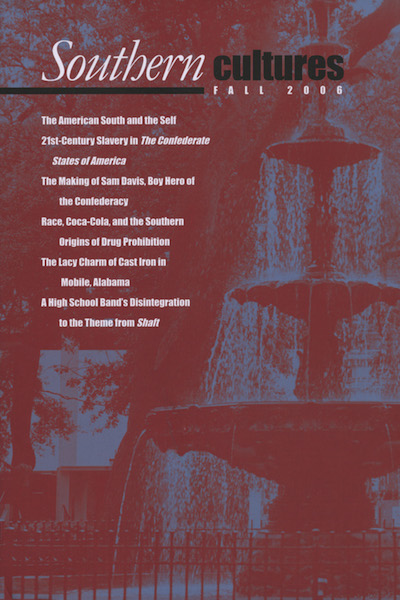 This issue finds the American South and the Self; 21st-Century Slavery in The Confederate States of America; the making of Sam Davis, Boy Hero of the Confederacy; race, Coca-Cola, and the southern origins of drug prohibition; a high school band’s disintegration to the them from Shaft, and more.

"What is it that makes people think of themselves as southerners? It isn't just birth."

"Just as the history of the South is contradictory and contested, so too, is the identity of southerners."

"Today, you can even get married at the Sam Davis home. Apparently some couples see no irony in tying the knot at a shrine to a lost cause."

"'You could buy all the dope you wanted in the drug store. Just ask for it, and you got it.'"

"Virtually every American city accessible by water had some ornamental cast iron, but it was nowhere more exuberantly employed than in the Deep South."

"Are blacks to be proud of the film? Or is it just an expansive, self-indulgent joke that goes on too long?"

"Now we were about to premiere, for an audience suspecting more anemic halftime show standards, the hottest jam of the Black Moses, Mr. Hot Buttered Soul himself."