"Many may feel we no longer recognize the region or the country we thought we knew, or dared to hope for."

Like the rest of the nation, we at Southern Cultures and the Center for the Study of the American South are reeling with shock and horror at last weekend’s events in Charlottesville, Virginia. The invasion of this peaceful town, home of Thomas Jefferson himself and his iconic University of Virginia, by hordes of armed neo-Confederates and Nazi sympathizers, was frightening enough. The death of thirty-two-year-old Heather D. Heyer, a “a strong woman” and a peaceful counterdemonstrator, at the hands of a member of the mob, as well as cries of victory from the alt-right and the initial decision by the President to blame “many sides,” have driven home the realization that unabashed political terrorism has returned to our homeland.

The resemblance of the Charlottesville violence to such events as the murder of nine members of Mother Emanuel AME Church of Charleston, the six deaths in the Greensboro Massacre of 1979, and the 1962 riot to block James Meredith from the University of Mississippi, not to mention the countless other lynchings, shootings, and burnings that lie behind them in our past, is obvious to anyone with a passing memory of those older tragedies. Once again, Confederate symbols have been flashpoints for murder. The perpetrators were not all southern, but their methods and rhetoric came directly from southern history—indeed, from a powerful strand of southern culture. For white southerners especially, the Charlottesville violence is a part of our family story, sadly replete with heritage and hate.

The perpetrators were not all southern, but their methods and rhetoric came directly from southern history—indeed, from a powerful strand of southern culture.

The events of Charlottesville threaten to overwhelm us. Many may feel we no longer recognize the region or the country we thought we knew, or dared to hope for. But even while the blood is still fresh, there are things we must remember for the struggles ahead. To begin, the South’s heritage is not all hateful. The presence and meaning of “Mr. Jefferson’s university” is an enduring monument to an educated, democratic, tolerant, and enlightened South, and we cannot give up on the dream it stands for.  Mr. Jefferson himself has much to answer for in the saga of American racism, as commentators have reminded us this weekend and previously. But his sins and ours are tightly knotted around our blessings.  Jefferson even embedded his strongest endorsement of white supremacy in the same document as his clearest condemnation of slavery.   We cannot hope to untangle such knots, for Jefferson (and so many of his devotees) was just as much a racist as a democrat. What we can do is recognize the reality and the interrelationship of all his (and our) many sides, and keep respecting what needs preserving. A historians’ adage puts it simply: “No Jefferson, no Lincoln.” 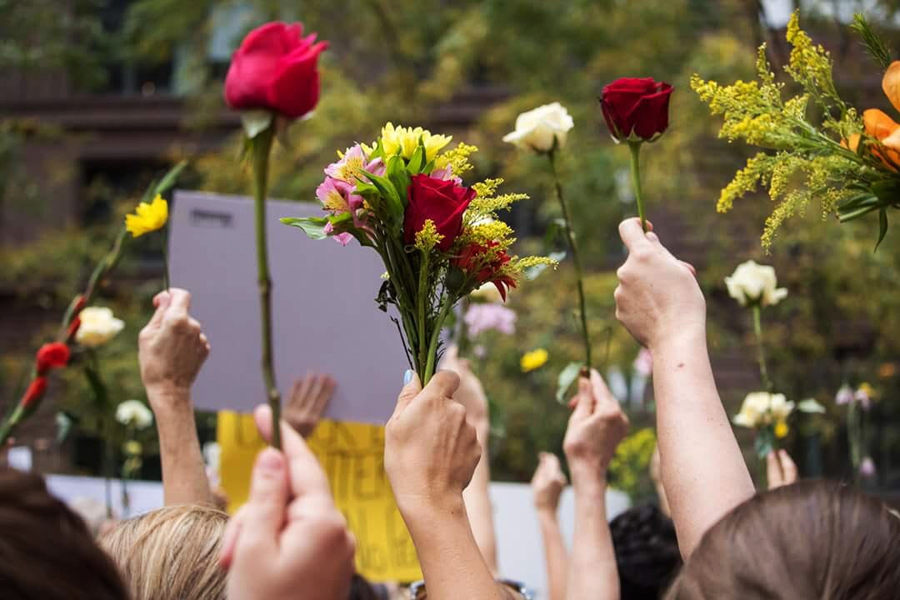 Photo of a memorial march for Heather Heyer in Chicago. Photo by @womensmarchIL via Twitter.

Then there is the matter of General Lee’s statue and all the others that echo it. Defenders of Confederate memorabilia insist that the campaign to remove them is an effort to “erase history.” If so, it’s hardly likely to succeed. After all, old times here are not forgotten, and the history will not change if the statues go or stay. In fact, we clearly need to study the South and its history even more than ever, and not simply through silent statuary. Some will still maintain that those solemn courthouse sentinels should stay in place to keep reminding us of all they represent. But at what cost?  The best case for those monuments is that they remind us to keep our worst demons at bay. But how has that worked out?  If the main effect of Confederate memorials is to unleash those demons and incite another wave of civil war across the South, the case for them looks weaker by the day.  Tired of waiting, a crowd in Durham, North Carolina defied state law on Monday evening and toppled their courthouse Confederate themselves, just as crowds before them did to the images of Lenin, Stalin, Saddam, and even George III.  If this is the wave of the future, we had better send in the professional movers, before somebody gets hurt.

In fact, we clearly need to study the South and its history even more than ever, and not simply through silent statuary. 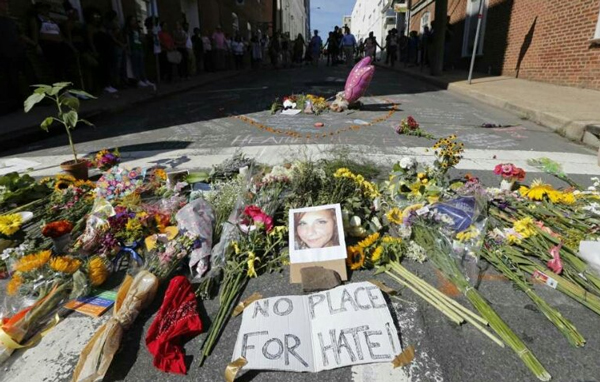 Memorial for Heather Heyer in Charlottesville, VA. Photo by @Dax_x98 via Twitter.

Finally, we have to admit that the tears of Dr. King are falling on all of us today, for so many of Saturday’s counterdemonstrators discarded the lessons of nonviolence.  Many of us do not know that armed community members often stood in the shadows of the civil rights movement to protect the nonviolent protestors out front.  Some have praised the “anti-fascist” movement or antifa for similar conduct in Charlottesville, but others blame them for more pro-active fighting.  Clearly, the overwhelming majority of southerners and Americans of all races will reject deliberate violence.   At the very least, anyone with other ideas should remember that the Ku Klux Klan is always likely to outgun them, and that moral weapons will be more effective in the long run.  Without condoning mayhem by anyone, however, it is worth remembering that Saturday’s violent news clips did not show us a race war. Images of white and black people resisting white people largely filled our screens instead.  The lesson is that none of us can face the onslaught alone, so the enemies of racism must maintain a common front. In the struggles ahead, the nonviolent fight for justice will embrace all colors, all faiths, all genders, all humanity.

―The staff of Southern Cultures, The Center for the Study of the American South, and the Southern Oral History Program